Viktor Hovland was asked about what video games he played when he was younger. 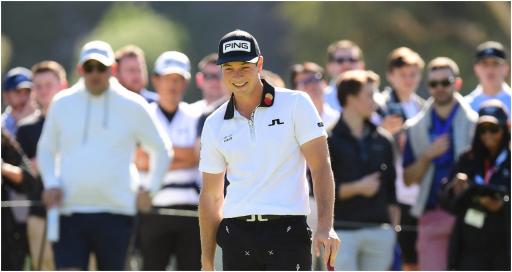 Viktor Hovland says he still has to "pinch" himself over the success he has had in golf recently.

The Norwegian, 24, came into The Players at TPC Sawgrass as the world number three after a stunning spell in golf.

He won in Mayakoba. He won in Albany. He departed the PGA Tour for a brief spell on the DP World Tour and won in Dubai.

Last week at the Arnold Palmer Invitational he came up just short and simply had to applaud the supreme Scottie Scheffler.

That performance at Bay Hill was off the back of a T4 finish at the Genesis Invitational at Riv, hosted by Tiger Woods.

More: Matsuyama forced out of The Players

"I don't think too much about that. I try to kind of stay in the present. I mean, I've already won six times worldwide," he said.

"I would already say that's a success, so anything that I do kind of the rest of my life really is just an added bonus.

"I'm just trying to have fun with it and trying to get better, and we'll see where that goes."

It is safe to say that everything is coming up Viktor. He played his first round at Pete Dye's layout with Patrick Cantlay and Jon Rahm.

In his press conference before round one, he was asked if he had played TPC Sawgrass on a video game.

Hovland said: "I remember I had the 2004 PGA Tour game, Tiger Woods game, but I don't think I ever played TPC Sawgrass. I remember I was shooting some 57s and stuff on that game, so pretty solid."

What course did he play the most?

"Pebble Beach a decent amount I remember, and then again, I just don't remember any other courses really. Some 57s, that's for sure."

The 2022 Players is the richest tournament in PGA Tour history.

What does Hovland think of that?

"Yeah, it's a lot of money for sure. Definitely a lot of guac and double meat." - Find out what this is in reference to.

"But regardless of how I finish this week, it's not really going to change my life, at least not right now.

"Obviously it's nice to have in the bank for the future and whatever, but I live in Oklahoma and I still have the same joggers that I had two years ago and probably should upgrade those.

"But yeah, I mean, I live a pretty easy lifestyle, but it's more about having the chance to lift the trophy and be a part of something special."