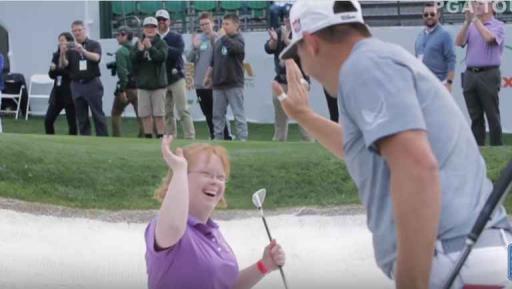 Amy Bockerstette has made history this week by becoming the first golfer with Down syndrome to compete in a college championship.

The 22-year-old has made scores of 111, 121 and 118 in the first three rounds of the four-day event, in what has been an inspiring week for the young athlete.

2021 is Bockerstette's third year on the team at Paradise Valley Community College. Two years ago, she made even more history when she became the first person with Down syndrome to earn an athletic scholarship.

Bockerstette, who is from Arizona, has been playing golf since her days at middle school and she had another incredible moment in her career when she met former US Open champion, Gary Woodland, in 2019.

Bockerstette was invited to play the par-3 16th hole at TPC Scottsdale, which is famous for the stands that surround the green, with Woodland and his playing partner Matt Kuchar.

The young golfer hit her shot in the greenside bunker and walked alongside the two PGA Tour players down to the green, smiling and greeting the crowd who were cheering her on.

Bockerstette hit her shot out of the bunker and then holed her putt to make a great par on the tough hole, and she was congratulated and embraced by Woodland and Kuchar.

It was a special moment in PGA Tour history and it is clear to see that Bockerstette is having a great golf career that is far from over.