Brooks vs Bryson: Golf fans debate who will have the better career

Brooks Koepka and Bryson DeChambeau have each achieved so much in their respective careers, but who will have the better career? 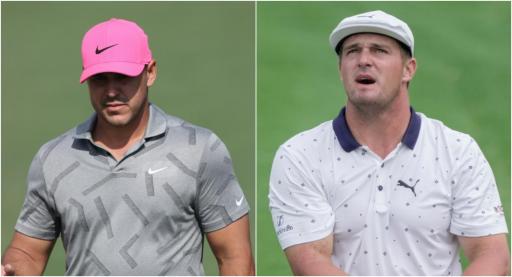 Brooks Koepka and Bryson DeChambeau are two of the most explosive players on the PGA Tour, who have enjoyed much success in recent years.

Koepka has experienced recent disappointment on the PGA Tour. The 31-year-old won a race against time with injury to play at The Masters, but unfortunately, he missed the cut.

The man from Florida has missed the cut four times this season but picked up an impressive win at the Waste Management Phoenix Open, showing he will always have the conviction to win tournaments.

DeChambeau is the current US Open champion after picking up his first major championship at the event which was held at Winged Foot in September 2020.

The 27-year-old's improvement this season has been largely down to his increase in strength and hard gym work. He followed up his US Open victory with a win at the Arnold Palmer Invitational in March.

GolfMagic asked golf fans which player will have the better career, and here are some of the comments:

"In the 4 years of age difference Dechambeau will have more than 15 wins," one fan said.

"Brooks for sure. Bryson’s swing will cause him back issues," one fan commented.

"Obviously brooks Bryson career has already been made kid literally changed the way clubs are made," one fan said.

In total, DeChambeau has won 10 professional events, whereas Koepka has picked up 15 wins in his nine-year professional career.

Koepka has also won four major championships, with two US Opens and two PGA Championships, and made $34 million in career earnings on the PGA Tour, while DeChambeau has made $24 million.

It is certainly a debate in which there are two sides and the careers of both American superstars are far from over.