Rory McIlroy's heart rate reached whopping heights after he had sealed the win at the Wells Fargo Championship. 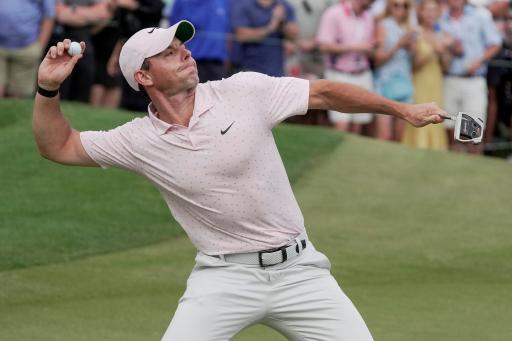 When the PGA Tour announced its new partnership with Whoop back in January, as interesting as I found their technology and data, I wasn't sure if it would bring any added value to the fans watching from home, but I was very wrong.

Whoop allows people to track their physiological data by wearing a strap on your wrist which helps people understand the way they train, recover and sleep, with all the information viewable on their impressive app.

Multiple stars on the PGA Tour are using Whoop so that they can get the most out of their training, especially as their profession involves so much travelling.

Rory McIlroy is one of those players and during the Wells Fargo Championship, we were able to see his heart rate thanks to Whoop Live, which throughout the season will highlight player's biometric data and heart rates for all to see whilst watching at home.

I for one found it incredibly interesting to see how McIlroy's heart rate fluctuated during the final few holes of last week's event, as he closed in on his first win in over a year-and-a-half.

With a two-shot lead on the 18th tee, McIlroy's heart rate suddenly went from 120 BPM (Beats Per Minute) to 140 when he saw it land in the penalty area.

The experienced PGA Tour star managed to calm down for his approach shot, with his BPM going back down to 115, before rising to 128 as he made his winning putt and up to a whopping 152 when he threw his ball into the chanting crowd in celebration after ending his drought.

The latest content addition to the PGA Tour has gone down brilliantly with not only myself, but fans around the world, with the video of McIlroy receiving multiple replies.

"Next to the ball tracer, this has been the best TV feature to be added," said one golf fan.

"This is awesome! Loved seeing the heart rate once the “Rory” chants start," said another.