Bernhard Langer continued to roll back the years at the Chubb Classic on Sunday, completing a three-shot victory for his 43rd win on the PGA Tour Champions. 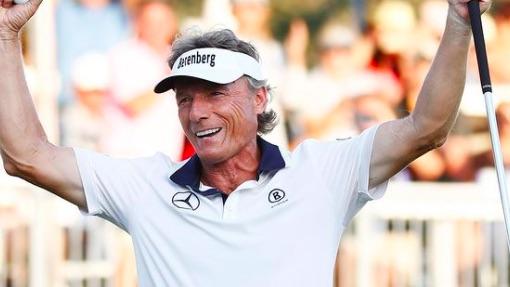 Bernhard Langer was compared to Tom Brady by the PGA Tour Champions commentary team after he won the Chubb Classic for the fourth time in his career.

Langer shot a 4-under-par 68 to close out on 16-under-par at Tiburon Golf Club’s Black Course, three shots ahead of Tim Petrovic.

The German secured his 43rd win on the PGA Tour Champions. He is only two victories behind Hale Irwin's record total on the veteran's circuit.

The two-time Masters champion became the oldest PGA Tour Champions winner in October at the Dominion Energy Charity Classic and in the first round of this week's event, he shot his age of 64.

"I liked this golf course when I saw it last year. I felt I could win here. It's not one for the bombers, where you just hit it as far as you can and hit it again. You've got to be very precise" Langer said after the victory.

"What @TomBrady did at his age is nothing short of remarkable. What Langer is doing is historic."@BernhardLanger6 can't be stopped. pic.twitter.com/I3HMTZ795b

"It's usually windy and the greens are hard and firm and very awkward some of them, in a good sense, it's more precision here than pure brute strength, and that kind of fits my game more.

"So I was fortunate to drive the ball very well. I think I hit 39 out of 42 fairways, which is key. And keep the ball out of the hazard, out of the trees, give yourself opportunities to hit greens and make birdies."

As Langer tapped his ball in for another win, the commentary team put his achievements above those of Tom Brady, who retired from his NFL career earlier this year aged 44.

"What Tom Brady did at his age is nothing short of remarkable. What Langer is doing is historic," were the words used to describe Langer's win at the Chubb Classic.

Although he has been a professional golfer now for 50 years, he shows no sign of relenting and Hale Irwin's record of 45 wins looks to be in serious jeopardy.

NEXT PAGE: JUSTIN THOMAS SAYS HE SHOULD HAVE "JUST HIT" EMBARRASSED COLLIN MORIKAWA