Billy Horschel has become the latest golfer to speak out against the popular putting method that mirrors the banned anchoring style. 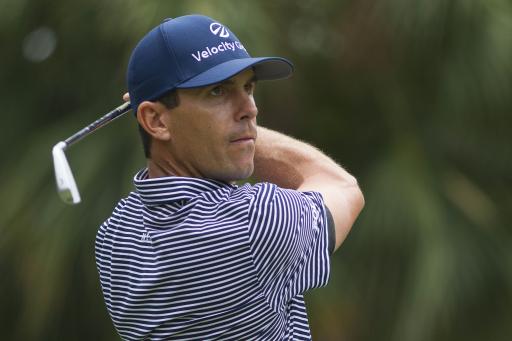 Billy Horschel has said that the arm-lock putting method should be banned, in the same week where Gary Evans also spoke out against it as well.

In recent years, various golfers on the PGA Tour have anchored the putter, which means to position the putter against a part of your body to guide your stroke.

This was banned in 2016 but in recent weeks, there have been suspicions that anchoring has returned with the arm-lock method and Billy Horschel believes this should be banned.

"I'm bringing up something different here and I'm going out on a limb, but I don't think this arm lock putting should be allowed either," said Horschel.

"I think when you look at what guys are doing now with the arm lock and moving the grips to the side where it's parallel or matches the face and then when you do that up against your arm, I mean, it's - you know that face is dead square and that face doesn't rotate at all. It's just sort of locked in. Guys are doing it too good.

"Yes, you could say it's anchored. I don't know because I guess anchored is having one point against somewhere and a fixed point. I know that's not fixed, but it's something similar to an anchor style."

Bryson DeChambeau, Will Zalatoris and Matt Kuchar appear to have used the arm-lock method, where the player leans the club up against the inside of their left arm.

As Horschel says, this may not necessarily be classed as "anchoring" but it has clearly got people talking again.

The World No. 18 won the Dell Technologies Matchplay in March and has enjoyed another good week so far at the RBC Heritage.

The 34-year-old shot two rounds of 66 and 67 at Harbour Town Golf Links to finish in tied 4th position at the halfway point, seven shots behind Stewart Cink.