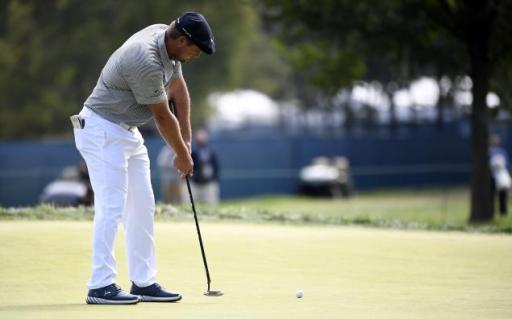 Former European Tour player Gary Evans has reignited the debate on Tour players anchoring their putters, which is a style that was recently banned.

Various players from different Tours across the world have been known to use a part of their body to anchor their putter and help them make their stroke, but the ban on this came into effect in 2016.

Dear @RandA & @USGA when are you going to ban anchoring? If this isn’t anchoring, I do not know what is! Come on now, bring back two hands on a 10” grip & the putter being the shortest club in the bag! pic.twitter.com/eEKDA5HaM8

Evans, who was a European Tour player from 1992 to 2006, took to Twitter and found some pictures of professional golfers who he still believes appear to be "anchoring" their putters, with the highest profile of those being World No.6 Bryson DeChambeau.

Evans aimed his tweet at the R&A and the USGA as the former European Tour player sought to find answers about what is classed as anchoring in 2021.

DeChambeau uses a SIK Pro C-Series Arm Lock putter and it would appear that the US Open champion grips the club with the grip of the putter in contact with his left arm.

Two-time Masters champion Bernhard Langer is also another well-known golfer who has previously anchored his putter. Langer before used a long putter with a large grip and used his chest to guide the club.

Other players who currently use an Arm Lock method include Webb Simpson and Matt Kuchar, but the list appears to be growing all the time. Even one of the Tour's most respected putters Kevin Kisner is dabbling with an Arm Lock putter at this week's RBC Heritage - READ HERE.

Golf fans responded to Evans to make their feelings known on the subject.

All this came about via the ‘game within a game’ nonsense. All golf strokes should be golf strokes. Only hands touching the club. Only one grip per club.

Just waiting for the first anchored Driver to appear! It’s a game of skill and nerve but not if you can strap a putter to your arm

Kuch’s reverse anchor last week was the worst. It is pretty much only pros that use the long putters as well so almost bifurcation. Banning them and green books would be a step forward. Don’t hold your breath.

Evans was a top amateur golfer before he became professional, and he won two Lytham Trophy titles and the English Amateur Stroke Play Championship twice before turning professional in 1991.

He also played in the Walker Cup in 1991 alongside 2014 Ryder Cup captain Paul McGinley and three-time major champion Padraig Harrington.

A big highlight of Evans' career was when he finished tied fifth at the Open Championship in 2002, just one shot out off a playoff that was eventually won by Ernie Els.

The Englishman made himself a popular figure when on the 17th green at Muirfield that week when he holed an incredible 50-foot putt and celebrated in front of the camera with the words 'that was for you, Mum'.