Billy Horschel fired a superb 65 on Saturday at Muirfield Village to leap into a five-shot lead, having started the day two shots behind Cameron Smith. 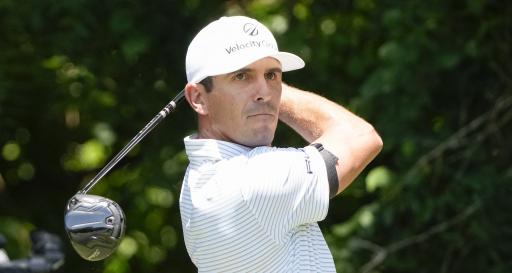 Billy Horschel dominated the third round of the Memorial Tournament, firing a superb 65 to take a five-shot lead into the final round.

Horschel became the first player to record back-to-back bogey-free rounds at Muirfield Village since Byeong Hun An in 2018. The American made four birdies in his opening eight holes.

With three more birdies on the back nine, Horschel carded a round of 7-under-par and he leads by five shots from Aaron Wise and overnight leader Cameron Smith.

"Really solid round of golf. Very pleased with the work Fooch and I have done. Not only today but over the last three days," Horschel said after his round.

"I think just going through our process, making sure we have a number where we're trying to land the ball, talking about the shot, the club selection, the wind.

"When we do that, it allows me to have a clearer picture and have a little bit more of a higher acceptance level over the golf shot. Everyone has told me on my team for years, that when I have that, I'm able to make better golf swings on a regular basis."

Horschel, who won the 2014 FedEx Cup, is looking for his seventh win on the PGA Tour and his first win since last season's BMW PGA Championship at Wentworth.

The gap could've been four shots however Luke List had a calamitous 17th hole. After a wayward drive left, he went on to make a triple-bogey to shoot even-par for the day when he had been 3-under.

The 2022 Farmers Insurance Open winner is now seven shots behind on 6-under-par. As for the Australian Smith in tied second place, he began the day on the back foot with two bogeys in his first two holes.

The World No.3 could only card a 72. Francesco Molinari, Daniel Berger and Jhonattan Vegas are in tied fourth place on 7-under-par.

Two-time Memorial winner Patrick Cantlay shot 3-under-par to edge closer to Horschel on 6-under-par, while Rory McIlroy carded a 1-over 73 to move 9 shots behind on 4-under.