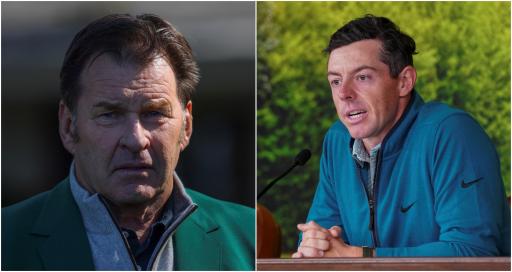 Rory McIlroy is often thought of as one of the most articulate players in the golf world.

He’s a member of the Players Advisory Council on the PGA Tour and whether or not you like the answers he gives they are always considered and measured responses.

But the Northern Irishman, now 33 years old, also demonstrated the quickest of wits when on the range at Muirfield Village this week when he roasted Sir Nick Faldo.

McIlroy was seen on the range clipping away a few of his wedges ahead of the third round of Memorial when on-course reporter Colt Knost could be seen in the background.

“That last thing you want is Colt Knost in your bloomin’ back swing when you’re trying to warm up,” Faldo offers in the commentary booth. “That will put you right off your day!”

This was too good not to share…@ColtKnost : “Say something really insulting about Nick.”@McIlroyRory : “I don’t have to, everyone else does.” pic.twitter.com/9B0dLEqAEr

“I would have had him removed back in the day,” he joked. “Swiftly”. Knost can obviously hear the chides aimed in his direction and asks McIlroy to say something insulting about Faldo.

“I don’t have to,” offers the four-time major winner. “Everybody else does!”. Boom, roasted. That was a proper zinger from McIlroy and it drew fits of laughter in the commentary booth.

Knost has taken to the on-course role extremely well and seems a popular figure with golf fans and players. He is a former PGA Tour player and has taken over the roles from Jim “Bones” Mackay.

Legendary caddie Bones now works for Justin Thomas and the pair now have their first major success together after the American won his second PGA Championship at Southern Hills.