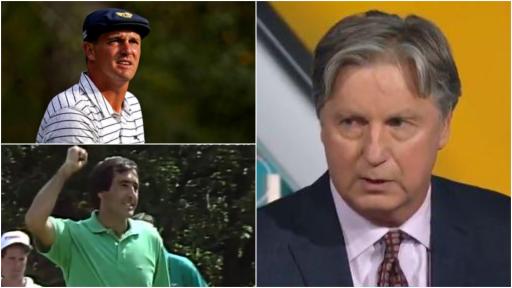 Golf Channel analyst and one-time PGA Tour winner Brandel Chamblee has taken to Twitter to defend Bryson DeChambeau after a number of Tour pros have hit out at the big-hitting American not shouting 'FORE' on a tee shot at the WGC-FedEx St Jude Invitational last week.

Chamblee believes if you look hard enough then "every player" will be at fault for not yelling 'FORE' at some point in a tournament - and he even went as far to include a video of late great Seve Ballesteros to get his point across.

I know people love to pick on DeChambeau for, well, pick your topic but when it comes to not yelling fore on a wayward tee shot, one could probably find every tour player at fault, somewhere, if you spent 10 minutes looking online. Here’s Seve famously missing way right. No yell. pic.twitter.com/tdMRrEDSNu

It's fair to say Chamblee's decision to single out Seve did not go down well on Twitter.

Check out the thread below:

Maybe attack someone who can defend themselves? A lack of class from you yet again.

Weird example here. Not sure why you would bring a legend like Seve into this

Why is Seve exempt from the point that every player through out the history of professional golf has hit wayward tee shots & not yelled fore. The point was that Bryson is being singled out and criticized and showing a hugely popular player like Seve illustrates the hypocrisy.

I think u are completely right BUT given the Bryson ball speed is known to be around 15/20 miles an hour faster than a most of the other “ big hitters “ aren’t the spectators in more danger from him. Also on a bad day when he is off line it can be really wild

Seve made sure he cleared the gallery. That way he got a clear shot over the trees to the flag.

But Seve doesn’t intentionally aim at the gallery. It’s not apples-apples with any other player unless they are aiming at gallery knowing full well they can carry it there. BD aiming at gallery with intent to carry there and not telling fore is not in the spirit of the game.

And BD drives are not wayward, they are planned and intentionally aimed at the gallery. For him to continue to do this and not yell fore knowing full well his intent is not in the spirit of the game and he should be reprimanded.

Weird example all round.
Bryson clearly lies to the public about what he says he does and his actual actions.
Bryson can actually do something about it now and present. Has a chance to address it and fails to.
Etiquette is expected and what those who play the game can align to.