European Tour pro tweets his disapproval at once again seeing Bryson DeChambeau fail to shout 'FORE' after an errant shot. 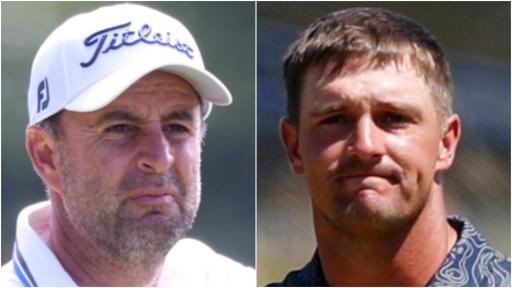 European Tour pro Richard Bland has hit out at Bryson DeChambeau for once again failing to shout 'FORE' after sending a drive into fans on the 18th hole at TPC Southwind.

DeChambeau told the media at The Open three weeks ago that he shouted 'FORE' "99% of the time", but many would consider that not to be the case given the big-hitting American uttered nothing when driving into a gallery at the US Open in June, and again at the WGC-FedEx St Jude Invitational on Thursday.

The Englishman now believes the only way he will learn is for "someone to get seriously injured".

WATCH: BRYSON DOES NOT SHOUT 'FORE' AFTER SENDING HIS TEE SHOT INTO THE GALLERY AT THE WGC!

"Bryson ploughing it into the crowd again off the tee & no shout of 'FORE' [shrug shoulder emoji] maybe it needs someone to get seriously injured for him to learn," tweeted Bland, who became the oldest first-time winner in European Tour history when clinching the British Masters at The Belfry in May.

Thought he shouted FORE all the time?! https://t.co/QOrKHY9iJ0

A number of golf fans responded to Bland's tweet, some in favour of it and others questioning whether it really is down to the player to prevent someone from getting injured.

"Does shouting 'FORE' actually have any effect on if someone gets hit though?" questioned one golf fan. "They already aren't watching the ball if the 'FORE' call would alert them, and by then it's too late to find it in the air and try and avoid it."

Another golf fan, albeit in the minority, agreed: "That is what the marshals are for, they show the direction the ball is going. 350 yards down the fairway you cannot hear someone yelling 'FORE'. You don’t want to get hit at a tourney, stay home or stand by the tee box."

"It’s called etiquette," responded an irate golf fan. "It’s part of the game. Playing in a tournament as a professional does not mean you are above proper etiquette. A marshal 300 yards away would have a hard time catching the flight of the ball, compared to the player who hit it."

Another golf fan tweeted: "Make it compulsory to shout 'FORE', failure to do so should be a 'Two Shot Penalty'. We know it’s a ploy to prevent the ball going into a difficult position. No Excuse."

What do you make of Bryson once again not shouting 'FORE' after an errant tee shot? Share your thoughts and comments over on our social media channels, or come and join us on YouTube.