Rick Shiels mocks Bryson DeChambeau on Twitter after the American fails to shout 'FORE' after an errant tee shot. 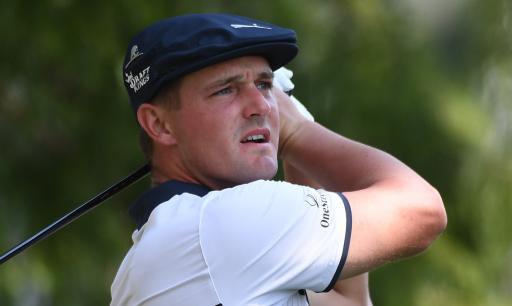 Bryson DeChambeau once again failed to shout 'FORE' after hitting an errant tee shot on day one of the WGC-FedEx St Jude Invitational at TPC Southwind.

DeChambeau was quizzed by a golf journalist several weeks ago at The Open Championship as to why he typically fails to shout 'FORE' after a wild shot, but he fired back by saying he "does 99% of the time".

Many would debate that percentage, especially after the big-hitting American did not shout 'FORE' when sailing his ball into the gallery on the 4th hole at the US Open back in June.

Unfortunately for DeChambeau, he did the same thing again on the par-4 18th hole in round one of the WGC-FedEx St Jude Invitational today.

DeChambeau started on the 10th hole and progressed nicely to 3-under par as he stood on the 18th tee. It was there where he fired a wild tee shot way right into the gallery without shouting 'FORE' or even signalling to the right.

Thought he shouted FORE all the time?! https://t.co/QOrKHY9iJ0

"Absolute disgrace again," wrote one golf fan on Twitter. "It doesn't take much to shout 'FORE' or stick an arm out to the right, especially when you're smashing a golf ball towards people just wearing T-shirts and shorts."

DeChambeau went on to card a solid round of 5-under 65 to lie just three shots off the early pace currently set by in-form compatriot Harris English.

With just one month to go until the Ryder Cup, England's Ian Poulter carded a much-needed opening round of 64 to lie just two shots back after 18 holes, joining Jim Herman, Carlos Ortiz and Matthew Wolff on 6-under par.

NEXT PAGE: CALUM HILL RACES TO THE FRONT AT HERO OPEN WITH COURSE RECORD AT FAIRMONT ST ANDREWS