Mark Wahlberg is Abraham Ancer's BIGGEST fan - and he celebrated the win with some Flecha Azul Tequila! 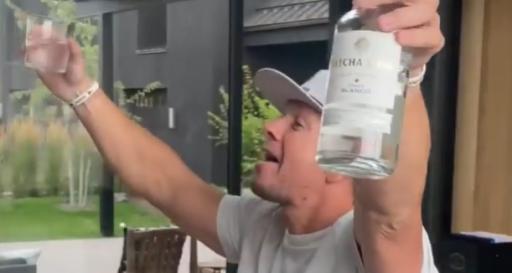 American actor Mark Wahlberg loves his golf, and judging by his reaction to Abraham Ancer's maiden PGA Tour title at the WGC-FedEx St Jude Invitational on Sunday night, he is a huge fan of the Mexican.

Wahlberg posted a video to his Instagram of him celebrating Ancer's playoff victory over Sam Burns and Hideki Matsuyama following a birdie from six feet at the second extra hole. Burns had a five-footer to extend the playoff, but his ball lipped out on the right side of the hole - much to the delight of the former rapper.

"Yes" shouted Wahlberg with delight while standing in the comfort of his living room with some Mexican Flecha Azul Tequila in his hands.

To add some context, Wahlberg is a good friend of Ancer's having played a number of rounds together down the years, and he is also a big advocate for Flecha Azul Tequila, which is founded by Ancer and Aron H Marquez.

The celebrations didn't end there as Wahlberg posted another celebratory Instagram post the next day while he was in the gym.

Wahlberg is famous for starring in Ted, The Fighter, Boogie Nights and The Departed to name just four of his most iconic films.

He is a huge fan of golf and is said to currently play off a 9 handicap.

In the past, he has said that his favorite part of the sport is getting to hit balls with his kids.

He has also constructed a practice golf area and driving range in his backyard.

NEXT PAGE: BRANDEL CHAMBLEE COMPARES BRYSON'S NO SHOUT OF 'FORE' SIMILAR TO THAT OF SEVE BALLESTEROS