Tiger Woods, who was seen holding crutches, was reportedly at a Los Angeles airport in a video that emerged last night. 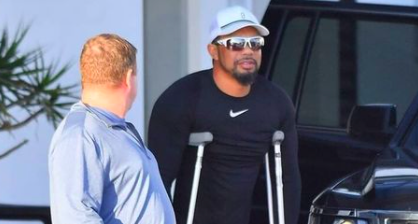 Tiger Woods was seen to be applying weight to his injured right leg in a new video that has emerged of the 15-time major champion.

In footage which was first posted by TMZ, Woods is walking on crutches and appears to apply weight on his right leg and briefly uses it to take a couple of steps on the ground.

It is reported that this footage was taken from a Los Angeles airport, however, it is not yet clear as to why he was there and where he may have been travelling to.

Woods was accompanied by his girlfriend Erica Herman in the footage. We know that the 45-year-old is in rehab and his main aim is to walk on his own and it is great to see that the golf legend looks to be making progress.

Woods had to be extricated from the wreckage of his car when he crashed in Ranchos Palos Verdes back in February. The American required surgery after suffering open leg fractures and injuries to his foot and ankle as well.

Golf fans are always grateful to receive updates on Woods' health and they were once again pleased to see this most recent footage:

"From my own tibia/fibula experience, Tiger not wearing a walking boot is a good sign of progress," one fan said.

"Damn it hurts so much. Show me you are a superhero again please Tiger," one fan commented.

"This guy has been through it all," another fan commented.

"Keep on going you are Superman best wishes to the best one!!!" one fan said.

NEXT PAGE: "I DON'T CARE WHO I PLAY WITH": BROOKS KOEPKA ON US OPEN PAIRINGS