Brooks Koepka believes that gamesmanship is commonly used at major golf tournaments on the PGA Tour. 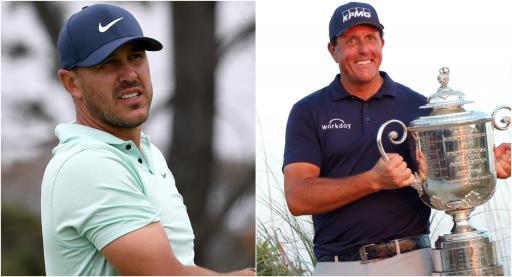 Brooks Koepka said that he couldn't handle Phil Mickelson's body language when they battled it out for the PGA Championship back in May.

Mickelson overcame Koepka and Louis Oosthuizen to win his sixth major championship and to become golf's oldest ever major champion at the age of 50.

Speaking to Golf Digest, Koepka commented on how he can pick up on little things such as body language and mannerisms and on that occasion, Lefty won the psychological battle.

"A great example of gamesmanship is what Phil did to me at the PGA. I got trounced on that one," said Koepka.

"I thought it was pretty good what he was doing. His body language. I don’t want to give it away, but I didn’t handle it well. You’ll have to ask him about it.

"I think he knew what he was doing. It wasn’t the reason I lost. I lost because I didn’t play well enough. It was tough for me to get into a rhythm, and the timing of how things were going. I could see (what he was doing) because I know it. I do it."

The final round of the PGA Championship at Kiawah Island was certainly a tense one. Koepka shot a round of 2-over-par to finish on 4-under-par for the week, which was two shots behind Mickelson.

Mickelson commented in his victory speech on how tough a competitor Koepka is and this is shown in his own major record with two wins at the USPGA and two wins in the US Open.

The 31-year-old showed his mental strength earlier in the season when after missing three consecutive cuts on the PGA Tour, he emphatically won the Waste Management Phoenix Open, which was his eighth career victory on tour.

"A lot of guys don’t like to say the word “shank” during a round. I don’t care," added Koepka.

"I've said it before. I’ll say, “Hey, didn’t somebody shank one here?” Some guys will hear that and crumble. I’m not saying that’s my go-to, but you can tell some guys are just -.

"If I go with my buddies, what I say to them is completely different. Every bad shot, you’re going to hear about it. On tour, it’s more the little things."