Brooks Koepka has gone blonde, just like Tiger Woods once did on the PGA Tour. 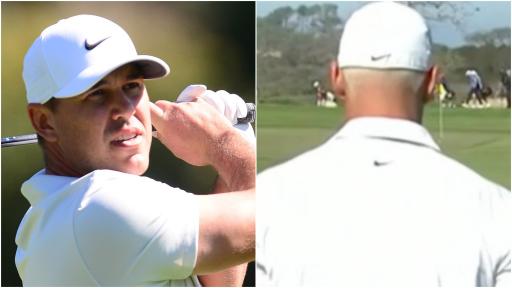 Brooks Koepka has done a Tiger Woods and dyed his hair blonde at this week's Farmers Insurance Open on the PGA Tour.

Koepka did not have the finest day out on the easier North Course in Wednesday's earlier start at Torrey Pines but he did end up making birdie on his final hole to shoot a round of 2-under 70.

The four-time major champion wasn't shown a great deal during the day one coverage but when he did appear on the broadcast at the 13th, it was noticeable that Koepka had opted for new hairstyle and gone blonde.

Much to the shock of golf fans around the world.

He then, to our delight, took his Nike cap off on the 9th green (his final hole) to show off the finished masterpiece:

Koepka was spotted in practice earlier this week with his normal dark hair colour, so the blonde is certainly a very recent thing.

Perhaps his fiancee Jena Sims had something to do with it?!

After his first round, Brooks then took to his Instagram page to post a video of his hair being done.

Koepka posted a caption to the video: "Blondes have more fun".

RELATED: JENA SIMS GETS NAKED TO CELEBRATE HER BIRTHDAY

Tiger Woods did something similar back in January 2001 when he went on holiday to the Bahamas.

"It was just a bit of holiday fun," said Woods' agent Mark Steinberg at the time.

Koepka is searching for his PGA Tour title in nearly 12 months having last tasted victory at the Phoenix Open in February 2021.

That particular tournament starts in two weeks so Koepka will no doubt want to make sure his game is in decent form heading into his title defence at the famous and rowdy TPC Scottsdale.

Here's how some golf fans reacted to Koepka going blonde:

I didn’t realize Brooks Koepka was cosplaying at Eminem this week pic.twitter.com/0lZ4bYAkbW

walking with his group and can confirm. Bleach blonde around.

NEXT PAGE: DONALD TRUMP SAYS HE'S THE 45TH AND 47TH PRESIDENT OF THE UNITED STATES WHILE HE'S INTRODUCED ONTO THE TEE