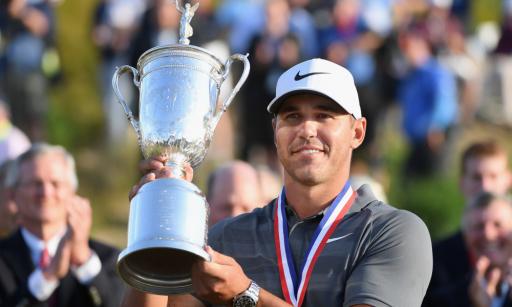 Brooks Koepka finally received some positive news to end his season after being named PGA Tour Player of the Year 2017-18.

Koepka has been in the news of late for his alleged bust-up with Dustin Johnson at the Ryder Cup, the same week he unfortunately blinded a lady spectator with one of his tee shots at Le Golf National.

The 28-year-old underwent wrist surgery at the start of the season and was forced to withdraw from The Masters in April, but he bounced back superbly when successfully defending his US Open title at Shinnecock Hills.

He then went on to win the US PGA Championship, ousting Tiger Woods for the title, to pick up his third career major and second victory of the season.

The Player of the Year for the 2017-18 season ...@BKoepka!#LiveUnderPar pic.twitter.com/cBCCextDfi

Congrats to BK @BKoepka on POY honors. Extremely deserving and played some unbelievably clutch golf at the biggest stages all year. Go lift some weights to celebrate

Koepka has only won four times in his PGA Tour career, but three of them have been majors - his sole Tour title came at the 2015 Phoenix Open, his first victory on the PGA Tour.

The big-hitting American moved up to second in the world rankings as a result of his two major victories this season, but he currently lies in third behind #1 Johnson and FedEx Cup champion Justin Rose in second.

PGA Tour
Bryson DeChambeau's one-handed golf swing is probably better than yours
PGA Tour
Jena Sims has bachelorette party ahead of marrying Brooks Koepka
Equipment
The BEST Nike Golf shoes we have seen on the PGA Tour!
US Open
Pebble Beach will host four future US Opens and first-ever Women's US Open
Equipment
The BEST Nike Golf apparel as seen on the PGA Tour!