Rory McIlroy has expressed his sympathy for Bryson DeChambeau off the back of the intense media attention that he has faced on the PGA Tour. 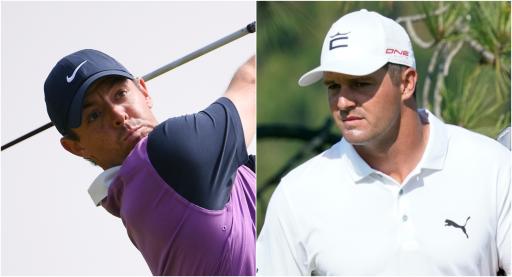 Rory McIlroy has come out in support of Bryson DeChambeau, saying that he should not be criticised for 'being different' and the hostility he receives is 'sad to see.'

DeChambeau has divided opinion on the PGA Tour in 2021. In the same season as winning his first major title at the US Open, he has also been the centre of attention for his feud with Brooks Koepka.

The big-hitting American lost to Patrick Cantlay in a memorable playoff at the BMW Championship last week, but he also made headlines for reportedly swearing at a spectator for calling him 'Brooksy' and asking Cantlay to stop walking while he prepared to take his shot at Caves Valley Golf Club.

McIlroy has been speaking to the media ahead of the Tour Championship this week and he expressed sympathy for DeChambeau, despite admitting that the 27-year-old is not completely innocent.

"I certainly feel sympathy for him, I don't think that you should be ostracized or criticised for being different and I think we've all known from the start that Bryson is different," said McIlroy.

Rory opens up about the current Bryson situation.

"He is not going to conform to the way people want him to be. He is his own person, he thinks his own thoughts and everyone has a right to do that.

"There are certainly things that he has done in the past that has brought some of this stuff on himself, I'm not saying that he is completely blameless in this.

"But at the same time, I think he has been getting a pretty rough go of it lately, and it's actually pretty sad to see. Deep down, he is a nice person and all he wants to do is be the best golfer that he can be.

"It just seems like every week, something else happens. I'd say it's pretty tough to be Bryson DeChambeau right now and I don't know if anyone else on tour has spoken up for him, but I definitely feel for him."

The Northern Irishman gave a typically honest summary of DeChambeau's relationship with golf fans and the media, which has fluctuated at many points throughout the season.

From saying his driver 'sucked' at The Open Championship to the debate on shouting 'FORE' off the tee box, the man from Modesto, California is rarely out of the headlines.

Both players occupy the top two spots in the PGA Tour driving distance numbers this season and we will see their explosive play at the Tour Championship this week.

McIlroy is a two-time winner of the FedEx Cup, while DeChambeau is in third position in the standings and in good shape to win the $15 million prize at East Lake.