"This is just the beginning" - Saudi Golf League leader Greg Norman ready to go to war against the PGA Tour. 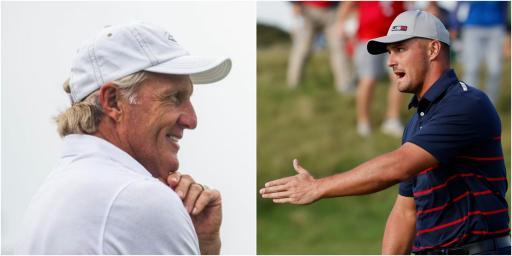 Days after seeing just about all of the world's best golfers rule themselves out of a proposed new Saudi Golf League, its leader Greg Norman has penned an intense letter to PGA Tour commissioner Jay Monahan.

Norman, a former World No.1 and World Golf Hall of Famer, now works as the CEO of a newly formed company called LIV Golf Investments, which is the driving force behind a new golf super league backed by Saudi billions.

RELATED: JAY MONAHAN TO PGA TOUR PROS: "ANYONE ON THE FENCE NEEDS TO MAKE A DECISION"

After all the fallout involving Phil Mickelson this week and hopes of a new Saudi Golf League seemingly dwindling by the second, Norman has rushed to the defence of his team and fired an extraordinary warning to the PGA Tour in the process.

Norman takes aim at the PGA Tour's Players Championship, claiming it should be called 'The Administration's Championship', before accusing Monahan of "bullying and threatening" the players on the PGA Tour by not allowing them to play elsewhere.

RELATED: HERE'S WHAT MICKELSON MESSAGED SHIPNUCK AFTER THAT SHOCKING EXCERPT WAS MADE PUBLIC LAST WEEK

The Great White Shark has certainly bitten back here.

It starts: "Surely you jest. And surely, your lawyers at the PGA Tour must be holding their breath." pic.twitter.com/kkJhR5CvRu

Surely you jest. And surely, your lawyers at the PGA Tour must be holding their breath.

As has been widely reported, you have threatened the players on the PGA Tour, all of whom are independent contractors, with lifetime bans if they decide to play golf in a league sponsored by anyone other than the Tour.

For decades, I have fought for the rights of players to enjoy a career in which they are rewarded fully and properly for their efforts. They are one-in-a-million athletes. Yet for decades, the Tour has put its own financial ambitions ahead of the players, and every player on the tour knows it. The Tour is the Players Tour not your administration's Tour. Why do you call the crown jewel in all tournaments outside the Majors 'The Players Championship' and not 'The Administration's Championship'?

But when you try to bluff and intimidate players by bullying and threatening them, you are guilty of going too far, being unfair, and you likely are in violation of the law.

Simply put, you can't ban players from playing golf. Players have the right and the freedom to play where we like. I know for a fact that many PGA players were and still are interested in playing for a new league, in addition to playing for the Tour. What is wrong with that?

What is wrong with allowing players to make their own decisions about where to play and how often to play? What is wrong with player choice? Why do you feel so threatened that you would resort to such desperate, unwise, and unenforceable threat?

I noticed a recent article by the former chief lawyer to the Federal Trade Commission that stated:

'Let's be clear: A lifetime ban is never going to happen. PGA Tour Commissioner Jay Monahan is no doubt being advised by high-priced lawyers who - if they are worth even a fraction of their lofty rates - have surely advised him of the legal consequences that will blow up in the PGA Tour's face if it imposes lifetime bans on independent contractors who choose to associate with a competitor.

'Most notably, imposing a lifetime ban on players would trigger a slam-dunk antitrust lawsuit by Norman's upstart league, the players, or even federal antitrust enforcers who have made it a priority to protect workers' ability to ply their trade for whomever they please without interference from corporate giants'.

Competition is all aspects of life, sport and business is healthy and the players deserve to be well compensated, which is why so many players have expressed an interest in playing in a new league. But when you threaten to end players' careers when you engage in unfair labor practices with your web of player restrictions, you demonstrate exactly why players are open minded about joining a league that treates players well, respects them, and compensates them according to their true worth.

Commissioner - this is just the beginning. It certainly is not the end."

What do you make of Norman's words? Will the Saudi Golf League still take shape or is 'dead in the water' like Rory McIlroy said the other day? Share your thoughts over on GolfMagic's social media channels now.