Bryson DeChambeau filmed HITTING BOMBS ahead of the Ryder Cup

Bryson DeChambeau has got a busy schedule ahead, as he plans to compete in a Long Drive contest the day after the Ryder Cup. 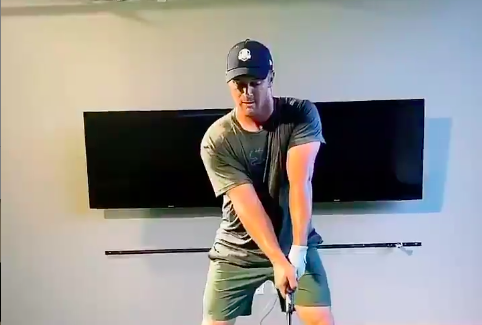 Although the PGA Tour season may have finished for many players, the grind never ends for 2020 US Open champion Bryson DeChambeau.

After finishing seventh at the Tour Championship, it put an end to an impressive and turbulent season for DeChambeau, but the Ryder Cup is just around the corner.

There is no question that he will be desperate to hit some monstrous drives in front of the American crowd at Whistling Straits, and his practice in this department has not slowed up.

The World No. 7 has been working on his long game in various indoor simulators recently, alongside Long Drive competitor Martin Borgmeier.

Borgmeier filmed DeChambeau smashing a driver in the net of a golf simulator on his Instagram story, and the American is still producing some unbelievable numbers.

He hit a drive that would have carried 357 yards and travelled a total of 374 yards, with a huge clubhead speed of 144.7 miles per hour.

On September 27, DeChambeau is competing in the Professional Long Driver's Association World Championship in Mesquite, Nevada.

Videos like this will increase the appetite of US Ryder Cup fans who want DeChambeau to secure as many points as possible for the team.

The 27-year-old played two pairs matches at Le Golf National in 2018, but although he was paired with Tiger Woods and Phil Mickelson, he lost both matches and didn't deliver a point for America.

There has been talk of how his relationship with Brooks Koepka could affect the American effort this year, but he has guaranteed that it will not be a problem.