Padraig Harrington on improving his STRAINED relationship with Sergio Garcia

Padraig Harrington once called Sergio Garcia a "sore loser" - but has now handed him a captain's pick for the Ryder Cup. 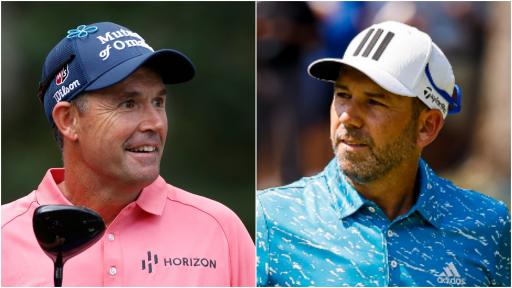 European Ryder Cup captain Padraig Harrington admits his relationship with Sergio Garcia will be "interesting" at the Ryder Cup later this month having once called him a "very sore loser".

Harrington handed Garcia one of his three captain's picks alongside Ian Poulter and Shane Lowry following the final round of the BMW PGA Championship at Wentworth on Sunday night.

Garcia and Harrington have never particularly seen eye to eye in the past, with the Irishman publicly open in his criticism of the Spaniard's past on-course strops and general behaviour.

"I’m very strong on the etiquette of the game, so I don’t tolerate people spitting in the hole, throwing their shoes or throwing golf clubs," Harrington once said of Garcia.

"That would be my attitude, and it would be quite clear where I came from.

"Then we went into the majors and obviously I beat him at the majors. I gave him every out I possibly could have at the 2007 Open.

"So clearly, after that, we have had a very sticky wicket."

RYDER CUP: "NOT PICKING JUSTIN ROSE IS A DISGRACEFUL DECISION"

But just 24 hours after announcing Garcia as one of his three captain's picks, Harrington wants to move their relationship on.

And that starts by teaming up together to help Europe retain the Ryder Cup in two weeks time.

"Myself and Sergio will be an interesting case," Harrington told Golf Channel on Monday.

"We've obviously been competitors nearly all our career. It's well publicized we wouldn't necessarily have got on.

"The Ryder Cup is bigger than that. I think it's probably been good for both of us.

"I've always appreciated Sergio's golf and I've always seen how good he is in the Ryder Cup and what he gives in the team environment.

"It's probably easier as captain but I know Sergio does a job and it's definitely helped our relationship.

"We have a common goal and we are working towards that."

NEXT PAGE: PADRAIG HARRINGTON INSISTS THERE IS NO FAVOURITISM BY PICKING SHANE LOWRY