We have taken a stab at who we think captains Padraig Harrington and Steve Stricker will pair together at Whistling Straits. 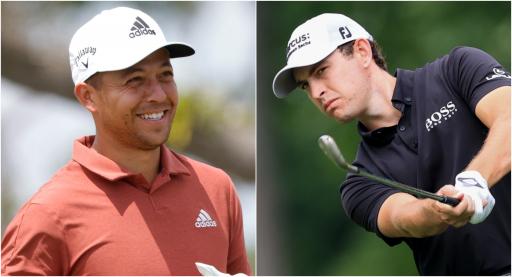 Now that Team Europe and Team USA have been decided for the Ryder Cup, there is only one more question to be answered: What are those all-important pairings likely to be?

Unfortunately, Tommy Fleetwood does not have Francesco Molinari to bounce off after the pair formed a formidable partnership that won four points at Le Golf National in 2018.

Ian Poulter was chosen as a captain's pick for the third time in a row in this Ryder Cup, and he has previously been paired with Rory McIlroy.

The pair inspired the comeback on Saturday evening at Medinah and they have also been previously paired together at the 2014 and 2018 Ryder Cups in Scotland and France.

RELATED: OUCH! FRANCESCO LAPORTA HITS HIS COACH ON THE HEAD AT THE BMW PGA!

Jon Rahm was paired with Justin Rose three years ago but the Englishman has not made Harrington's 12-man team for the matches at Whistling Straits - much to the frustration of many European golf fans.

As for the Americans, I would be shocked if FedEx Cup champion Patrick Cantlay and Olympic gold medallist Xander Schauffele were not paired together, as they teamed up in every pairs session of the 2019 Presidents Cup.

They are also known for playing many practice rounds together and they have joined forces on the PGA Tour for the Zurich Classic.

Long-time friends Justin Thomas and Jordan Spieth won three of their four matches in 2018, and without Spieth's former partner Patrick Reed in the US side, I expect to see Thomas and Speith going strong again.

It is uncertain as to who 2020 US Open champion Bryson DeChmabeau will be paired with. He had the pleasure of teaming up with Tiger Woods and Phil Mickelson in 2018, but he lost on both occasions.

These are some of the most likely pairings for the fourballs and foursomes at the 2021 Ryder Cup, in our opinion: