The story has made headlines again after a Twitter account linked to Patrick Reed's team made a sensational claim about the PGA Tour.. 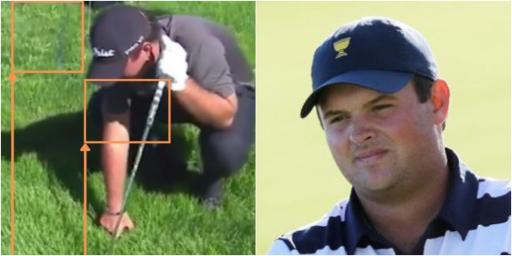 It all started with a Tweet sent at 2.32am to Eddie Pepperell months after the dust had settled over the Patrick Reed "cheating" saga.

If you have been living under a rock and were not aware of this long-running story then let us briefly refresh your memory.

Reed, nicknamed Captain America, has been accused of playing fast and loose with the rules on the PGA Tour for a while now.

It all came to a head when he appeared to be caught out improving his lie in an waste area during the 2019 Hero World Challenge.

MORE: THE KEY QUESTIONS OVER THE SAUDI BACKED GOLF SERIES

MORE: GOLFER HITS A STINGER INTO ANOTHER MAN'S LEG

The golf world were forthright in claiming this was in fact a moment of cheating caught on camera and even Brooks Koepka said it was.

Justin Thomas later joked about the incident when he was videod pretending to shovel sand out of a bunker.

Reed was given a two-shot penalty and thereafter ensued a weekly  "Reed watch" where fans and even players kept their eyes on the pro.

Daniel Berger was snapped at one PGA Tour event following Reed into the pinestraw to make sure everything was above board.

"Berger is straight up protecting the field" social media users commented while Reed continued his "who me?" act and felt victimised.

But for some bizarre reason this story has resurfaced as a Twitter account - assumed to from Reed's inner circle - fired off at Pepperell.

The account @useGolfFacts is widely rumoured to be controlled by Reed's wife Justine but this has never been confirmed.

Anyway, this account sent a reply to Pepperell in the early hours of the morning suggesting Reed was in fact the victim of a smear campaign.

Dry-humoured Pepperell responded in the only way he knows how and his reply summed him up perfectly:

It's a bit of a long story at this point but the account suggested to Pepperell that the shots of Reed in the waste area were digitally altered to smear him.

Reportedly, this person had hired an expert to look at the footage and "180 hours" had gone into proving this claim.

As you can imagine, many golf fans just sat back with some popcorn and watched the saga unfold.

This is just a snapshot of how golf fans responded:

Team Reed getting spicy in the comments months later. What did golf twitter do to deserve these gifts today. pic.twitter.com/oEgLpQmwNc

What a gift on this Wednesday morning. pic.twitter.com/ySuZ8FkZ5b

No doubt Reed will likely be questioned about this soon but we can probably expect silence.

He's playing on the PGA Tour this week in Bermuda and is one of the favourites to win.

NEWS: PAIGE SPIRANAC HAS A MESSAGE FOR THE HATERS

NEXT PAGE: FANS REACT AS GOLFER MOBBED BY KANGAROOS