Brooks Koepka was one of many players to fall victim to the impossible 17th hole at The Players Championship on Saturday. 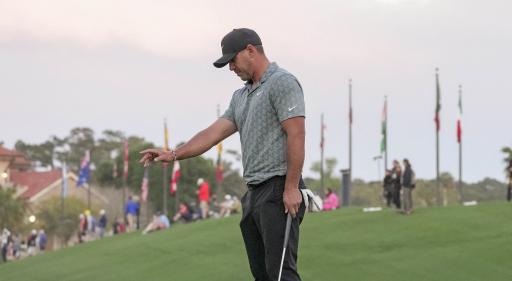 Brooks Koepka found the water on the 17th hole at TPC Sawgrass in both of his rounds during a treacherous Players Championship.

In his first round which was heavily delayed by inclement weather, Koepka found the water with his tee shot and went on to make a double-bogey.

The 31-year-old was part of the first group to play the famous par-3 on Saturday morning. Xander Schauffele and Scottie Scheffler both hit their tee shots in the water too.

During his second round which he completed on Saturday, a hatless Koepka took aim again but this attempt was even worse. He hit a high cut and his ball landed well short of the putting surface and into the lake.

Before the ball even landed, the four-time major champion began laughing. As they say in these situations, if you don't laugh, you'll cry.

This time, Koepka made a triple-bogey six after missing a short putt for a double-bogey. He signed for an 81 and finished on 9-over-par for the week.

Koepka admitted when asked at the Honda Classic that his record on the 17th hole can't be great, and he was right. In his last 20 attempts, he is 20-over-par. Yes, you read that correctly.

"The drop zone on 17 (the second scariest tee shot) because I've been there a lot," Koepka said during the Honda Classic.

"If they throw that stat up of who played it the worst over the last five years, it's probably me. Yeah, I haven't played that hole very well."

The eight-time PGA Tour winner's record at The Players Championship, in general, is not great. Since 2016, he has never finished in the top 10.

Next Page: Day two takeaways from Players Championship: Flawless Thomas and chaos at 17