Tiger Woods has thrilled golf fans for over two decades now and this video shows that it is not only the PGA Tour where he has produced his magic. 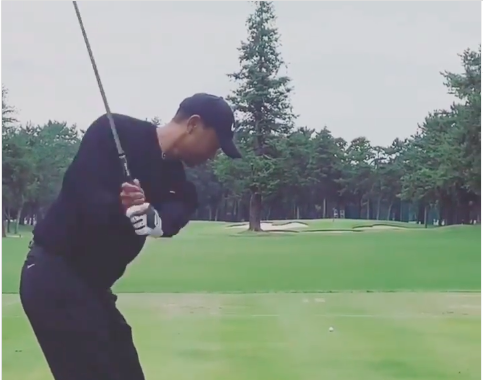 Tiger Woods has spent a lot of time with his fans throughout his career, putting on clinics and engaging with budding golfers who seek tips and advice.

Sometimes, the 15-time major winner treats them to a trick shot or two and this flop shot is one of his favourites to document his short game skills.

For this trick shot, Woods throws a ball down only a couple of yards in front of him. He then sets up his club next to another ball with the clubface wide open and he slices underneath it.

This produces an incredible amount of sidespin and as you can see in the video, Woods aims left to spin the ball around the back of the other ball which he threw down previously.

"He deserves to be knighted," one fan said.

"That's worth a major in my book," one fan commented.

"He chewed his gum faster, he was impressed," another fan commented.

"Goat of Goats," one fan said.

As if any of us needed reminding, this video just shows how supremely gifted Woods is as a golfer and that he is capable of pulling off almost any shot that he is faced with.

The 45-year-old has won a staggering 82 times on the PGA Tour and his 15 major championships put him in the frame to be arguably the world's greatest ever golfer.

Woods, since being involved in a serious car accident in February, has kept his fans updated with his recovery process after he required surgery to help with his injuries.

NEXT PAGE: BROOKS VS BRYSON: GOLF FANS DEBATE WHO WILL HAVE THE BETTER CAREER