Bryson DeChambeau agent on CADDIE SPLIT: "He was TIRED"

Bryson DeChambeau and his caddy Tim Tucker have split in an unexpected turn of events on the PGA Tour. 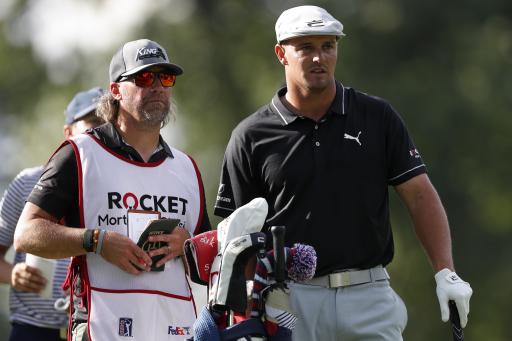 Bryson DeChambeau's agent has revealed that both the 2020 US Open champion and his former caddie Tim Tucker were both "tired" by the time their split was announced this week.

Brett Falkoff also revealed that it was an accumulation of reasons that led to the partnership breaking off. Ben Schomin is now caddying for DeChambeau this week at the Rocket Mortgage Classic.

"In any relationship, they run their course, and that's what happened here. It wasn't one specific issue. It was a culmination.

"Like any caddie-player relationship, they had their ups and downs. They wish each other nothing but the best and will always be there for each other."

Tucker became DeChambeau's caddie in 2016 and after a brief split in 2017, he resumed his duties in 2018 and he has been on the bag for all eight of the World No. 6's wins on the PGA Tour.

It was an unexpected announcement from the 27-year-old's team, especially on the eve of the Rocket Mortgage Classic, which the big-hitting American won last season.

DeChambeau has been at the centre of attention on the PGA Tour for several weeks now as he has been involved in an intense and entertaining feud with Brooks Koepka.

After the news of this caddie split was revealed, it did not take Koepka long to take advantage of the situation. The four-time major champion posted a caddie appreciation post on Twitter, paying homage to his caddie Ricky Elliott.

DeChambeau is yet to respond to Koepka's comments, but this could well have opened another chapter in the spat between the two Americans.