Jason Day had a good week at the Travelers Championship last week and he shot 5-under-par in yesterday's first round of the Rocket Mortgage Classic. 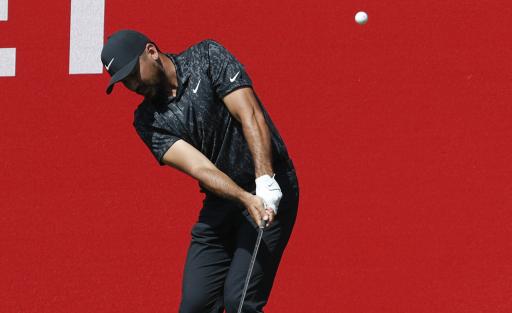 It has been three years since Jason Day last won on the PGA Tour and it has been extremely unusual to see such a talented and exceptional player away from the winner's circle for so long.

Day achieved his first top-10 finish since February at the Travelers Championship last week, producing some scintillating golf which could suggest the old Day is coming back.

After his solid first-round score of 5-under-par at the Rocket Mortgage Classic yesterday, the 2015 PGA champion described how he wants his nine-year-old son Dash to perceive him as a father and a golfer.

Dash has taken a strong interest in golf and plays with his friends in the PGA Junior League in Ohio, and he often has questions and queries about the game for his father to answer.

"He asked if I was a celebrity the other day and I said no," said Day.

"It gets me excited to be able to just kind of watch him, kind of help him, and I can sit here and just say, 'Dude, at one point I was the best in the world. Like, listen to me,'" Day added.

"But you know how kids work. It's like, 'You're my dad who cares what you think.' You know what I mean?"

It sounds as though the Australian takes great pleasure out of watching his son play golf and it would be great if he used this as inspiration to win another major championship and his 13th PGA Tour title.

Day and his wife Ellie now have four children and are a happy family, and I'm sure they will be even happier if Day was to build on his great first-round score in Detroit and go on to break his three-year win drought this week.

NEXT PAGE: BRYSON DECHAMBEAU AGENT ON CADDIE SPLIT: "HE WAS TIRED"