Bryson DeChambeau shot a disappointing round of level-par on day one at Detroit Golf Club to fall nine shots behind leader and co-course record holder Davis Thompson. 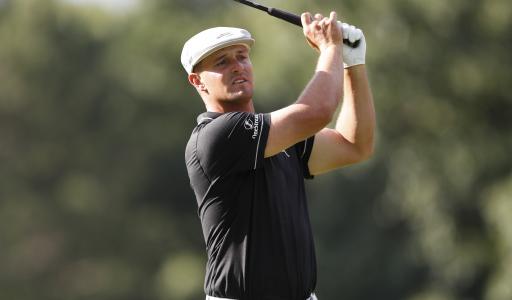 Bryson DeChambeau made a slow start to the Rocket Mortgage Classic on Thursday by shooting a 72 to finish nine shots behind Davis Thompson.

The World No. 6 won this tournament last season on 23-under-par, but he will do well to reach those heights now as he made three bogeys in his first nine holes.

DeChambeau replied with three birdies in his first nine holes as well, but the big-hitting American couldn't find the birdie charge he needed on the back nine to challenge the lead set by Thompson.

Before the first round of the Rocket Mortgage Classic began, it was announced through DeChambeau's agent that the 2020 US Open champion had split with his caddie Tim Tucker.

Although the pair were together during the practice rounds this week, the partnership has reportedly 'run its course' and DeChambeau will look to work with someone else.

The eight-time PGA Tour winner may not have played at his brilliant best yesterday, but he still managed to hit some monster drives. On the par-4 6th hole, he bombed his drive a staggering 352 yards and his playing partner Cameron Champ smashed one 348 yards as well.

In other news, Thompson shot a scintillating score of 9-under-par, which tied the course record at Detroit Golf Club. Playing via a sponsorship exemption, Thompson leads by two from Brandon Hagy, Tom Lewis and Joaquin Niemann.

It is only his third start on the PGA Tour as a professional, but Thompson fired nine birdies in a bogey-free round to card a 63 on a memorable day for the inexperienced player.

During the first round, play had been delayed as a result of inclement weather and some players will finish their first rounds on Friday morning.