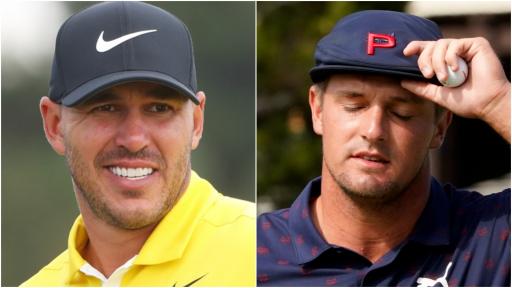 Brooks Koepka just could not help himself on social media as news emerged that Bryson DeChambeau had split from his long-time caddie Tim Tucker ahead of the first round of the Rocket Mortgage Classic.

Koepka took to his social media channels to post a caddie appreciation post for his right-hand man in Northern Ireland's Ricky Elliott.

RELATED: BRYSON SPLITS WITH HIS CADDIE AHEAD OF THE ROCKET MORTGAGE CLASSIC!

Elliott, who won a number of junior golf titles and once had eyes on a professional career, has been on the bag for all four of Koepka's major wins.

Koepka's post comes off the back of a war of words between he and DeChambeau in recent months, fuelled further when Brooks rolled his eyes as Bryson trudged past him during an interview at the US PGA Championship in May.

No Laying Up first broke the news on social media earlier today that DeChambeau and Tucker were parting ways ahead of this week's PGA Tour event. One source is claiming Tucker has decided to quit.

No Laying Up believes someone from DeChambeau's sponsor Cobra Puma Golf will be stepping in to caddie for the defending champion this week.

Phil Mickelson was another to have his say on the matter:

it was just an 8 iron

DeChambeau has known Tucker for the best part of 12 years and has been on his bag since 2016, albeit with a brief split for a period of six months in 2017.