Bryson DeChambeau and Patrick Cantlay locked horns on 21-under-par after a rollercoaster third round at the BMW Championship. 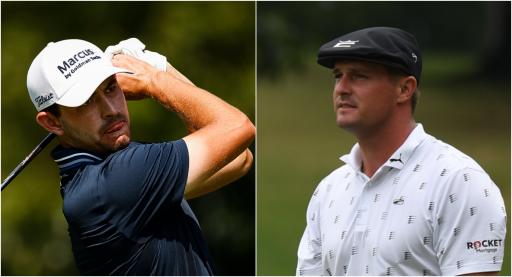 On a day when it looked as though Bryson DeChambeau could run away with it, he shares the lead with Patrick Cantlay on 21-under-par heading into the final round of the BMW Championship.

DeChambeau began the day with a one-shot lead over Cantlay on 16-under-par and he extended his lead on the third hole with a birdie and bolstered his card with back-to-back eagles on the 4th and 5th holes.

The 5th hole is a 322-yard par-4, which is driveable for the majority of the players in the field, and the World No. 6 drove his ball on to the green and holed a massive 53-foot putt for eagle.

DeChambeau then rolled in a 29-foot putt for another birdie at the 8th hole and suddenly, the former US Open champion held a four-shot lead.

But his control on the tournament began to fade on the back nine at Caves Valley Golf Club. He found the water with his second shot at the par-5 12th hole which led to a bogey.

DeChambeau finds the water again on 13.

A double bogey puts him one back. pic.twitter.com/FQ3HMUnMs4

And then on the par-3 13th hole, a baffled DeChambeau hit his tee shot into the water at the front of the green, which led to a damaging double-bogey and now Cantlay led by one shot on 21-under-par.

Cantlay, who won the Memorial Tournament in June, went about his business with few mistakes on Saturday. He played his front nine in 3-under-par and added birdies at the 11th, 12th and 13th holes to move ahead of DeChambeau.

After both players birdied the par-5 16th hole, Cantlay held a one-shot lead on 22-under-par until he made his only bogey of the day at the 18th hole to draw level with DeChambeau.

It was a turbulent day for the World No. 1 Jon Rahm, who made costly errors on his back nine to settle for a 2-under-par 70 to finish on 16-under-par for the week, five shots behind the leaders.

Rahm played his front nine in 4-under-par, but three bogeys in his last six holes took the sting out of his challenge to win back-to-back BMW Championships.