Bryson DeChambeau is on the charge to win his first PGA Tour event since the Arnold Palmer Invitational in March. 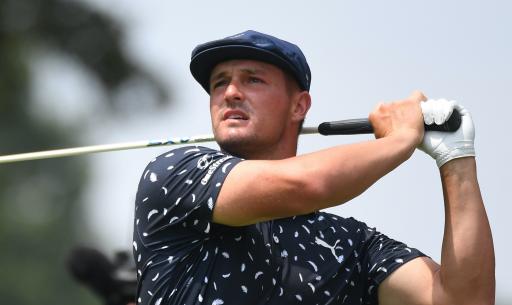 Bryson DeChambeau has started his charge in the third round of the BMW Championship by making back-to-back eagles on the front nine.

In the second round on Friday, DeChambeau missed a 6-foot putt on the 18th green to shoot an amazing round of 59, but he settled for a career-best score on the PGA Tour of 60.

The big-hitting American has continued his form into the third round at Caves Valley Golf Club. His electric start began with a birdie on the par-3 3rd hole.

DeChambeau made a fantastic eagle at the par-5 4th hole and then after driving the green at the 322-yard par-4 5th hole, he rolled in a monstrous 53-foot putt to secure his second consecutive eagle.

Back-to-back EAGLES. @B_DeChambeau rolls it in from 53 feet after driving the green. pic.twitter.com/NNKwmu0xnt

The eight-time PGA Tour winner moved on to 21-under-par for the tournament and at this stage of the third day in Maryland, he opened up a three-shot lead over fellow American Patrick Cantlay.

DeChambeau has only made two top-10 finishes in his last 11 appearances on the PGA Tour and he has not won since the Arnold Palmer Invitational in March.

However, the 27-year-old is now in a prime position to win for the third time this season and to move into the number one spot in the FedEx Cup standings.

DeChambeau has two wins to his name in the FedEx Cup Playoffs. In 2018, he won the Northern Trust and the Dell Technologies Championship.