Bryson DeChambeau is competing at the AT&T Byron Nelson on the PGA Tour this week and his driving looks to be on point in the first round. 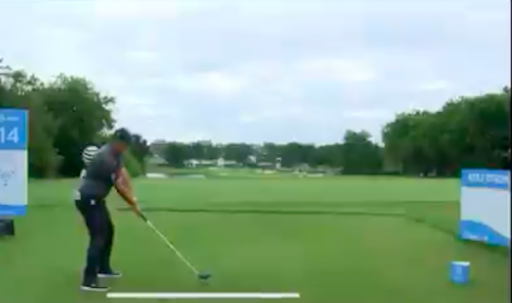 Bryson DeChambeau has added another drive to his list of bombs this year on the PGA Tour, as he drove the par-4 14th hole at the AT&T Bryson Nelson on Thursday.

The 14th hole at TPC Craig Ranch in Texas is 324 yards long, which is just about longer than the 27-year-old's average driving distance this season, with a series of bunkers surrounding the green.

With a large lake to the left of the hole too, DeChambeau was taking on a big challenge but he stepped up and hit his tee-shot as straight as an arrow, carrying his ball 319 yards onto the green.

His ball settled at the back of the green, giving himself a good look at an eagle. The World No. 4, unfortunately, didn't make the putt but he made a solid birdie.

The commentators were stunned by the US Open champion's shot to the par-4 green, but it is a shot that we have all become familiar with on the PGA Tour this season.

DeChambeau worked incredibly hard in the gym to prepare himself for the 2021 season, building his strength and swing speed so he could gain as much distance and advantage as possible.

The eight-time PGA Tour winner has averaged 322.1 yards off the tee this year, which is roughly four yards ahead of Rory McIlroy who is second in the driving distance rankings.

NEXT PAGE: BROOKS VS BRYSON: GOLF FANS DEBATE WHO WILL HAVE THE BETTER CAREER