DeChambeau dresses up in some festive PUMA gear, then shows off a new 146mph clubhead speed and incredible trick shot! 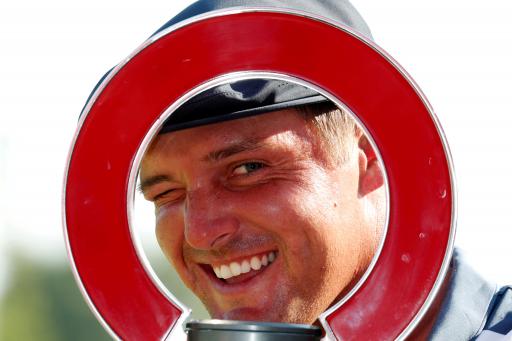 Bryson DeChambeau took to Instagram last night to reveal a big increase in his clubhead speed, along with an incredible trick shot with a wedge that went down the stairs and into a cup!

While we're not quite sure about the social distancing measures in place, DeChambeau's festive PUMA gear certainly gets approval. As too does his new 146.9 mph clubhead speed that he has been working on alongside his good friend and World Long Drive No.1 Kyle Berkshire.

DeChambeau's previous record for clubhead speed during the PGA Tour season had been 144mph clubhead speed. The American currently leads the PGA Tour driving distance stats with an average drive of 323.8 yards - but we all know he has got a 400-yarder on speed dial, especially with his brand new Cobra RADSPEED driver, which he has been raving about of late.

WATCH THE VIDEO BELOW to see DeChambeau reveal his new 146.9 mph clubhead speed, and scroll to 47 minutes on the video to see his incredible trick shot with a wedge where he chips a ball downstairs and into a cup! The rest of the video features Berkshire ripping drives and DeChambeau inviting a number of guests onto his story to chat:

WATCH: BRYSON DECHAMBEAU IN AWE AS KYLE BERKSHIRE HITS AN 8-IRON OVER 300 YARDS!

Check out what else Bryson has been up to during the festive break.

DeChambeau, who sits second behind Dustin Johnson in the current 2020/21 FedEx Cup standings, is expected to return to the PGA Tour in for the Tournament of Champions in Hawaii at the start of January.

WATCH: HOW TO INCREASE YOUR SWING SPEED LIKE BRYSON