Bryson DeChambeau struggled to get anything going during his first round at the Rocket Mortgage Classic, but he excited the Detroit fans with a monster shot on Friday. 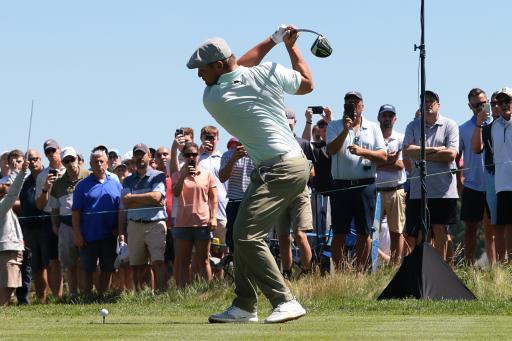 Bryson DeChambeau has excited fans and other players with his monstrous drives and big-hitting antics on the PGA Tour this season, and the Rocket Mortgage Classic has been no exception this week.

DeChambeau made a slow start in his defence of the tournament which he won last year, shooting level-par on Thursday. This put him nine shots behind leader Davis Thompson, who equalled the course record with his superb 63.

But the 2020 US Open champion came out on Friday meaning business and this was never more obvious than on the par-5 14th hole, which was his fifth hole of the day.

DeChambeau had 275-yards left into the green and after a short deliberation with his new caddie Ben Schomin, he took out a hybrid from his bag and took aim at the hole.

As you can see in the video, the eight-time PGA Tour winner said that he had 295 yards left to the pin, so he has almost hit his hybrid a staggering 300 yards.

The numbers that the 27-year-old has achieved this season with his long clubs have been absolutely groundbreaking and it is a direct result of his efforts to build strength by spending many, many hours in the gym.

RELATED: BRYSON DECHAMBEAU AGENT ON CADDIE SPLIT: "HE WAS TIRED"

DeChambeau won the Rocket Mortgage Classic last year on 23-under-par, but he has got his work cut out if he is to reach these heights again at Detroit Golf Club in 2021.

Before he began his first round on Thursday, DeChambeau's agent Brett Falkoff announced that he and his caddie Tim Tucker would be parting ways in an unexpected turn of events.

Falkoff has since revealed that it was a culmination of reasons that led to the pair parting ways after their alliance had led to all eight of the big hitter's PGA Tour wins.