Troy Merritt made his first career hole-in-one at Detroit Golf Club to hold the 54-hole lead with Joaquin Niemann. 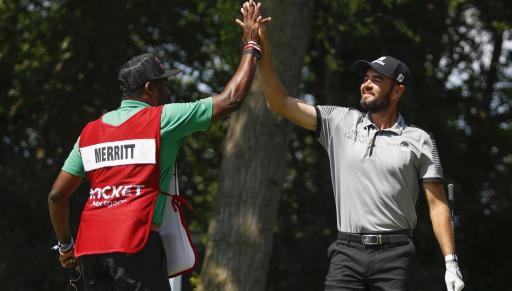 Troy Merritt made his first career hole-in-one on the 11th hole at Detroit Golf Club to take the 54-hole lead alongside Joaquin Niemann at the Rocket Mortgage Classic.

Merritt began the day one shot behind leaders Niemann and Tom Lewis on 9-under-par and the American made a hot start on Saturday with four birdies in his first nine holes.

He reached 13-under-par for the tournament before he reached the 218-yard par-3 11th hole. Merritt hit a lovely, high draw that bounced once and landed in the hole for his first career hole-in-one on the PGA Tour.

AN ACE FROM THE LEADER! @TroyMerritt_PGA makes his first career hole-in-one and extends his lead to 3 shots. pic.twitter.com/79iJIXLLL4

The two-time PGA Tour winner raced into a three-shot lead with seven holes to play and it looked as though the 35-year-old was well on his way to a third victory.

But a bogey on the 12th hole brought him back to 14-under-par for the week, and Niemann was still very much in the thick of things with a solid 68 in the third round.

The impressive Chilean made four birdies in a bogey-free round to move to 14-under-par alongside Merritt and they lead by one from Hank Lebioda and Australian Cam Davis.

At one stage on Saturday in Detroit, fan favourite Rickie Fowler shared the lead. Although he bogeyed the second hole, he made five birdies in his next 13 holes to reach 10-under-par.

The World No. 95 finished with a 4-under-par 68 to finish on 9-under-par for the tournament. He is five shots behind Merritt and Niemann heading into the final round.

US PGA
US PGA: Here's how much Justin Thomas and others won at the PGA Championship
Equipment
The BEST PUMA golf polo shirts as seen on the PGA Tour!
US PGA
PGA Tour pro SLAMS Southern Hills as US PGA conditions prove difficult
US PGA
Who is US PGA leader Mito Pereira's wife? Meet Antonia Prida
US PGA
Kramer Hickok has a nightmare in the sand then holes out at PGA Championship