Bryson DeChambeau attempted a trick shot on his new Regecy platform where he chips a ball upstairs and into a long tube. 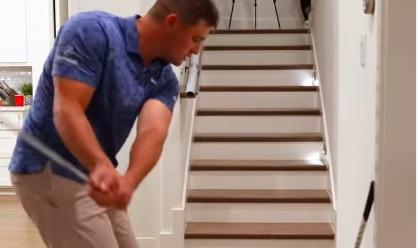 Bryson DeChambeau is currently taking some time out of his PGA Tour career while recovering from an injury to his wrist.

DeChambeau had to miss out on The Players Championship with his injury and he was unable to defend his title at the Arnold Palmer Invitational too.

He also withdrew from the Sony Open and the Saudi International earlier this season and it would appear he suffered from hip pain, as well as wrist pain, at the Farmers Insurance Open.

Last week, the 28-year-old informed us to expect "something big" coming in the next few weeks. Could he return at The Masters? We wonder what the big surprise will be.

In the most recent post on Regecy's account, DeChambeau accomplishes an amazing trick shot that very few golfers could dream of doing.

The eight-time PGA Tour winner pitched his ball up the stairs and it landed perfectly into a tube, which ran back down the stairs towards some pots and pans.

He fist-pumped as the ball found the tube. His ball popped out of the bottom of the tube and it hit the first pan. The ball then bounced on to the next pan and rebounded into the cup.

The group went mad when DeChambeau pulled it off. Was this the "something big" that he was promising to the golfing world?

Next Page: One-armed PGA Pro raises funds for Ukraine orphanage where he grew up