After finishing T9 at the Wells Fargo Championship, DeChambeau moved up to 4th in the world rankings. 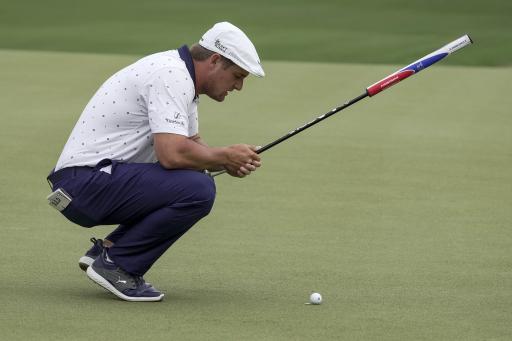 Bryson DeChambeau has reached a career best in the world rankings, after his T9 finish at the Wells Fargo Championship moved him up to World No.4.

The reigning US Open champion went into last week's PGA Tour as World No.6 but his performance at Quail Hollow means he has moved up two places and ahead of Collin Morikawa and Xander Schauffele.

DeChambeau's previous career best in the world rankings was 5th, which he has held on more than one occasion, most recently after his T3 finish at The Players Championship, before his rather lacklustre position of T46 at The Masters moved him back to 6th.

The 27-year-old made the headlines halfway through the tournament when he left thinking he would miss the cut and returned home to Dallas, before a challenging change of conditions saw those ahead of DeChambeau faulter and he jumped back up the leaderboard to make it to the weekend.

"I made triple on seven and then chipped in on eighth for birdie, and I thought I had to make birdie on the last and I missed the putt, so I thought there's no way I'm making it," he said after his third round on Saturday.

"Sure enough, conditions kept getting worse and by the time I landed I was in, 64th or 63rd or whatever. It was funny. We did a lot of scrambling last night to get back. One of the scenarios was turning right back around, but the crew couldn't refuel and their hours were out.

"So we tried to get a new crew and it just didn't work out. So we're like, 'Well, let's just go in the morning'. So I left at 2:45am on a flight and I got here at 6:20am, drove 30 minutes to the golf course, put on my clothes in the locker room and headed out to the putting green. I did get a workout last night, though!"

DeChambeau was able to play through the tiredness and he will be glad he made the trip back to Charlotte, as two 3-under par rounds of 68 on both Saturday and Sunday saw him finish in a tie for 9th, move up to 4th in the world rankings and take home a tidy $228,825, which should cover his rather regretful travel expenses.