Bryson DeChambeau's power play has never been more evident than when he won the Arnold Palmer Invitational in March. 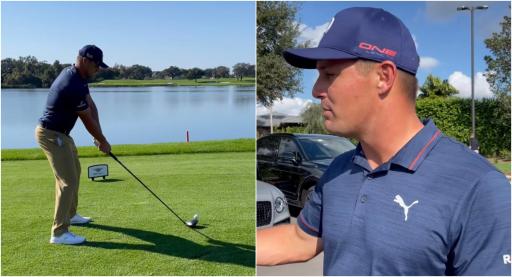 Bryson DeChambeau won the Arnold Palmer Invitational back in March. This was a key point in his career as it was further evidence of his pursuit of power and distance.

We saw his 'bomb and gauge' tactics at Winged Foot in September 2020. These tactics led to a dominant display to win the US Open, his first major championship.

But there was one shot that we stood up and took notice of at Bay Hill. In the third round, the World No. 7 arrived on the 6th tee box and produced something special.

This is one of many birdies that he made that week in Florida. And he celebrated the drive by lifting his arms in the air and pointing to the sky.

In DeChambeau's Instagram story, it showed footage of the eight-time PGA Tour winner returning to Bay Hill and returning to the 6th hole.

DeChambeau's interest in hitting long drives has only increased since March. He hit a drive of over 400 yards at the Ryder Cup and he competed at the Professional Long Drivers Association World Championship in September.

In his story, he bombed another drive across the iconic, scenic hole. He didn't show us where it landed, however, there's no doubt it would've been similar to the shot he hit nine months ago.

RELATED: TIGER WOODS REVEALS CHARLIE'S BEST ROUND EVER AND HOW HE HAS SEEN CANTLAY SMILE

The Arnold Palmer Invitational is one of the most prestigious non-major events of the season and the fans behind DeChambeau's drive on the 6th hole went wild when he made his arm gesture.

As you can see in the image above, all of the fans wanted to get their own footage of the drive and as DeChambeau shows, it is very hard to forget this moment on the PGA Tour.

NEXT PAGE: JUSTIN THOMAS AND SMYLIE KAUFMAN TROLLED BY THE PGA TOUR ON TWITTER!