This is everything you expect from Wild Thing... 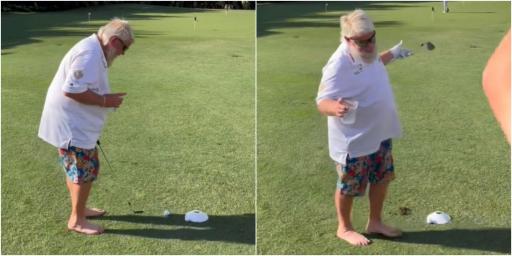 John Daly is a maverick of the game.

Known for his love of drinking and his unique, powerful swing, the 55-year-old is a popular figure in golf.

Daly has the nickname Wild Thing purely because of his self-taught golf swing that he is famous for.

Here, he demonstrates what makes him such a draw in the game by entertaining a crowd with a one-handed chip shot. He even holed it.

Daly was filmed at Trump National at Doral hitting some shots on the range in front of a gallery of fans at a celebrity golf clinic.

Wedge in one hand, drink in the other, shirt untucked and sunglasses on: this is John Daly.

He takes a couple of practice swings and then gives it a go. He clipped it beautifully and then off it runs.

We don't have an exact yardage, but it looks like a fair distance. Perhaps more than 60 yards give or take?

Still, it's an impressive shot - to say the least.

Daly turns round and holds up his hands as if to say: did you expect anything different?

He has won five times on the PGA Tour, three times on the European Tour and famously won the '95 Open and the '91 PGA Championship.

Daly is playing at the PNC Championship this weekend with his son Little John Daly, who absolutely bombs it like his father.