The 28-year-old American has given a behind-the-scenes look at what he focuses on so he can be tidy around the greens on the PGA Tour. 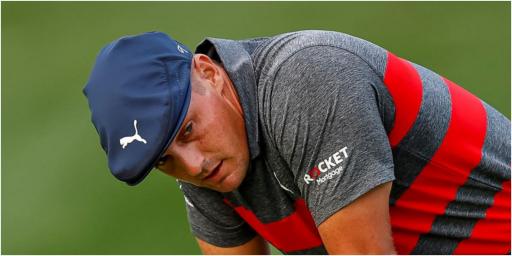 Bryson DeChambeau has established himself as one of the top players in the world.

Thanks to his insane workout schedule and his work ethic it is easy to see why he became the 2020 U.S. Open champion.

His YouTube channel launched not so long ago and he has been posting regular content giving golf fans their DeChambeau fix.

So far we have seen him training for long drive, gearing up for the Ryder Cup and even his workout sessions.

MORE: THIS TIGER WOODS PUMPKIN WILL BLOW YOUR MIND

MORE: 33 PER CENT OF GOLFMAGIC READERS GOT THIS WRONG

DeChambeau, 28, cuts a relaxed figure off the course despite working seemingly around the clock to improve his game.

He's posted another video showing how he practises his short game.

It's an interesting look at how to improve your wedge game.

DeChambeau admitted he doesn't see himself as a good wedge player.

But perhaps his standards are a little bit different to ours.

DeChambeau shows how he warms up with his one-length clubs hitting miniature chips by "controlling the radius".

The swing of @B_DeChambeau during his amateur debut at Bay Hill and at this year's @APInv. pic.twitter.com/RNTVs9fx6F

He explains how he keeps his left arm straight then uses his body to "pick" the ball like you are sweeping a broom.

DeChambeau describes how with the little shots he envisages hitting a draw.

Elsewhere he talks through the differences in the types of lie you will face around the green.

He breaks down three types of "stock" shots you have to use.

Then he heads into the bunker and explains how the ball will react and how you can control the strike.

He makes it look easy, but we know it is anything but.

MORE: ST ANDREWS FLAT UP FOR SALE FOR £2.8 MILLION

NEXT PAGE: IS RORY MCILROY CORRECT WITH THIS ADVICE?