Jordan Spieth almost dropped out of the world's top 100 players earlier this year, but now he is back where he belongs. 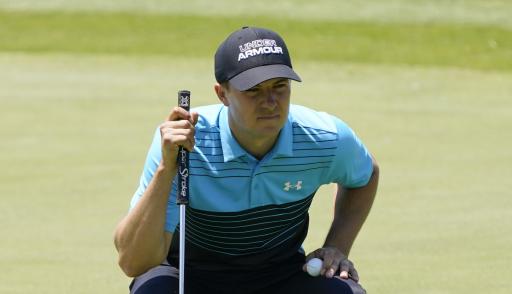 Jordan Spieth is back in the world's top 10 players for the first time since 2018. The three-time major winner is back where he belongs.

Spieth did not even have to play at the Butterfield Bermuda Championship to move from 13th in the world rankings to 10th. He finished tied 18th at the CJ Cup in his sole appearance of this new PGA Tour season.

2021 has been the year of the revival for Spieth. After missing the cut at the Farmers Insurance Open, he dropped to 92nd in the world and he was on the brink of falling out of the top 100.

The 28-year-old made three top-five finishes in his next four starts and the week before The Masters, he won the Valero Texas Open at TPC San Antonio.

Incredibly, this was Spieth's first win since The Open Championship in 2017. He ended a drought that you would not associate with such an impressive player.

He finished tied third at The Masters and second at this year's Open Championship at Royal St. George's. This form has helped him climb back into the top 10 ranked players in the world.

After finishing second at the PGA Championship in 2015, he became the best player in the world for the first time in his career.

2015 was an incredible year for the man from Dallas. He won the Valspar Championship and the John Deere Classic, as well as The Masters, the US Open and the FedEx Cup.

He has not quite returned to the levels of six years ago, but Spieth is a 12-time PGA Tour winner and there will be plenty more to come.

NEXT PAGE: DEBATE: DOES THIS PIECE OF ADVICE FROM RORY MCILROY TO IMPROVE YOUR GOLF WORK?

PGA tour
Jordan Spieth
World No.1
US Open
The Masters
Previous
Bryson DeChambeau shares valuable tips on how to vastly IMPROVE your short game
Next
Greg Norman on Saudi-backed golf series: Players are DYING to get out there

US PGA
Kramer Hickok has a nightmare in the sand then holes out at PGA Championship
US PGA
Who is PGA Tour star Will Zalatoris' girlfriend? Meet Caitlin Sellers
US PGA
Cameron Smith hits PGA Tour pro ON THE HEAD with errant tee shot at US PGA
PGA Tour
Phil Mickelson's Mum: "Not too many people recognise him"
LIV Golf
Greg Norman: "Who is suppressing women's golf, quite honestly?!"