Just over 10 minutes before his tee time on Saturday, Lucas Herbert felt something strange with his driver on the practice ground... 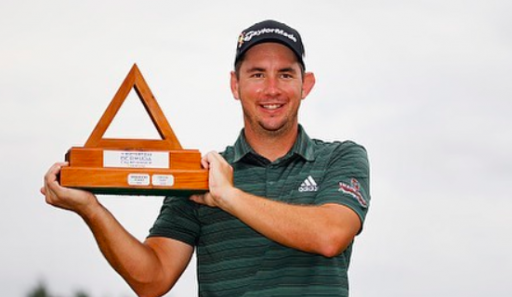 Lucas Herbert was very close to teeing off in the third round of the Butterfield Bermuda Championship with a broken driver.

The Australian was practising hitting punch shots and shots under the wind to prepare for the treacherous conditions of Port Royal Golf Course.

He then felt an issue with the face of his driver and before he knew it, he and his team were madly scrambling for a new clubhead. This is because he had 12 minutes before he was due to tee off.

"I was just kind of hitting a couple of low ones, obviously sort of getting ready for playing on a windy day," said Herbert.

A special week for @LHGolf5.

"With probably 12 minutes until we teed off, it was back to the locker. Get a new driver head."

"Luckily, we had spares in the locker room. Yeah, had to run with that on the fly, but it turned out all right."

It was a stressful moment for the two-time European Tour winner, but he fortunately made his tee time of 11.03 am in Bermuda.

RELATED: DEBATE: DOES THIS PIECE OF ADVICE FROM RORY MCILROY TO IMPROVE YOUR GOLF WORK?

This flurry of excitement was soon forgotten and Herbert went out in the third round and shot a superb score of 65, the same score that he shot in round two.

The 25-year-old went on to fire another round of 69 on Sunday to win the Butterfield Bermuda Championship, finishing one shot ahead of Patrick Reed and Danny Lee on 15-under-par to win his first PGA Tour title.

It could have all been so different if he failed to find a new clubhead within that 12-minute period.

NEXT PAGE: WHICH PGA TOUR STARS HAD THE BEST HALLOWEEN FANCY DRESS?