Justin Thomas, Tony Finau and Patrick Reed were just some of the names that were excited about Tiger Woods' return to public life. 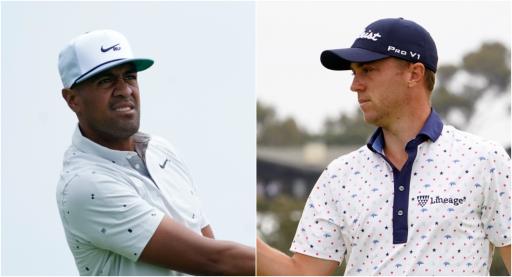 Tiger Woods returned to public life at a live press conference in the Bahamas yesterday, if you didn't already know, as he hosts this week's Hero World Challenge.

Not only were golf fans and the media excited by his return, but his fellow PGA Tour competitors were pleased to hear of his progress too.

Essentially, the main points that Woods outlined were that he cannot return to a full-time career on the PGA Tour, which was sad to hear but not when you consider where he has come from.

The 15-time major winner also admitted that having his leg amputated was an option while he was in the hospital and just being able to go outside was a significant milestone in his rehabilitation.

He said that his back and his leg were still in pain as he sat there in front of the world's media, so this is why a career on the PGA Tour is not possible for the 45-year-old.

Many players from the PGA Tour expressed their thoughts on Woods' return, including close friend Justin Thomas who had visited Woods' house during his recovery.

"I know I’ll be pulling for him and helping him in any way I can. His body has gone through what it has, but if he were to return to the PGA Tour, it would mean a lot," Thomas said.

"But he has to decide if he wants to try and come back, and then wonder if he can compete, and have fun and feel that it’s worth it. He’s done enough for the tour.

"At least in my eyes. Anything else he does is a bonus. I’ve said many times, don’t doubt him. If he can come back, if he decides to come back, he will."

Two-time tour winner Tony Finau, who is in the field for the Hero World Challenge, said what is most important is that Woods is back and seeing him in Albany was the highlight of his week.

"What he has given this game is a legacy that will never go unnoticed. There is nothing else he has to prove. But he’s such a beast. He always feels like he has something to prove, whether to himself, to the people that continue to doubt him," said Finau.

"For us, to be able to enjoy just having Tiger back in any way, shape or form, for me, that’s a blessing.

"It’s sad that potentially we have seen the best of Tiger, that we might not see him play again, that he just can’t climb that mountain again, but we have to enjoy what we have. We have Tiger back."

RELATED: TIGER WOODS TELLS THE MEDIA STAY AWAY FROM MY FAMILY AT PRESS CONFERENCE

Patrick Reed helped Woods put on his fifth green jacket when he won The Masters in 2019 and he said we should put nothing past the legendary golfer.

"As a player and seeing what he’s gone through, and not just this time but all those other injuries and surgeries, it’s hard to tell what will happen. It’s Tiger Woods we’re speaking of. I’d put nothing past him," Reed said.

"You never know. He’s been discarded before. But he has come back, and he’s won. It’s awesome to see him swing a golf club again. We didn’t know if we’d ever see that again.

"It lifted the morale of the players and himself and the fans. Even if he came back and played just the father-son again, that would be huge for him."

Former US Open champion Justin Rose is one of the lucky players to be in the 20-man field this week and he described Woods' incredible recovery.

"He has come so far, it’s amazing, from where he was a year ago getting out of that car to where he’s at right now," Rose said.

"We are all relieved he can think about the quality of life, but more so he still has that sort of slight dream and glint in his eye of being able to compete. What I love about Tiger is if someone says he can’t, that’s what drives him.

"But it seems he has a measured approach. He’s like, I’m not sure I can be the best in the world and my body might not let me be able to do that, but I might be able to have a chance to click one or two off here and there."

NEXT PAGE: TIGER WOODS TELLS THE WORLD "I GOT THAT LAST MAJOR" BUT IS TARGETING THE OPEN

PGA tour
Tiger Woods
press conference
Justin Thomas
patrick reed
Previous
Tiger Woods tells the world "I got that LAST major" but is targeting The Open
Next
Tiger Woods: The Masters is unlikely but could he return at St. Andrews?