Brooks Koepka & Bryson DeChambeau: A timeline of their "FROSTY" relationship

"I may not have abs, but I have more majors than you" 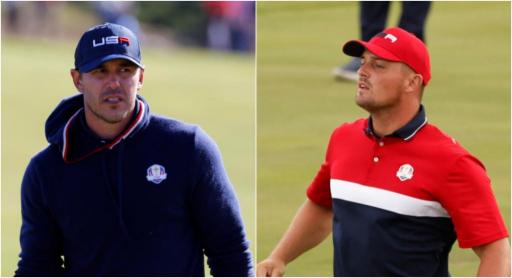 In case you've been living under a rock then you'll no doubt have seen Bryson DeChambeau and Brooks Koepka publicy airing their grievances against one another.

But what you may not remember is their "feud" - which is apparently over now after they hugged it out at the Ryder Cup - far pre-dates the last year when the famous Koepka eye-roll interview went viral.

It all began in 2019 and it involved a complaint over slow play. In the beginning of his career, a remarkably skinnier DeChambeau always came in for flack over the time he took to play any shot. Then he got to the green and it got even worse.

The time it took DeChambeau to finally strike a putt you would feel pretty comfortable that any other Tour pro could play another hole. Or two.

Now the pair are set to play against each other in the fifth edition of The Match, in a Las Vegas shootout in the desert. It will be played over 12 holes on the 26 November.

Let's have a closer look at the Brooks/Bryson timeline:

Koepka was getting annoyed with slow play in general.

He told the media:  "It really drives me nuts especially when it’s a long hitter because you know you’ve got two other guys or at least one guy that’s hitting before you, so you can do all your calculations, you should have your numbers."

Working on it. Thanks Eddie https://t.co/PdEz5u8IHz

DeChambeau is widely pilloried for his slow play at the Northern Trust.

Bryson felt like he was being picked on, telling the media, "people don't realize the harm that they are doing to the individuals.

You were right @b_dechambeau I am 2 short of a 6 pack! pic.twitter.com/aCJ1jimId6

DeChambeau is asked about Koepka's physique.

He didn't have any abs, he said on a Twitch stream.

I may not have abs, but I have more majors than you.

This was when things really kicked into gear.

Koepka was being interviewed by the Golf Channel.

DeChambeau mutters something behind him.

Koepka rolled his eyes and stopped.

The video leaked and it was everywhere.

The fallout was hilarious.

DeChambeau told Koepka on Twitter: "It's nice to be living rent free in your head."

Bryson DeChambeau every time a fan calls him “Brooksy” pic.twitter.com/jmxio345rK

The fans start trolling DeChambeau, goading him with shouts of Brooksy.

Then Koepka starts trolling him.

Around this time DeChambeau also starts having a pop at Cobra, saying that his driver "sucks".

Koepka again wades in with tweets of: "Driving into the weekend."

Bryson DeChambeau and Brooks Koepka put their rivalry aside to embrace in front of the media after Team USA's #RyderCup victory over Europe ⛳️pic.twitter.com/tVmeQL64Yc

The PGA Tour finally steps in, announcing they are to chuck out fans shouting "Brooksy".

The Ryder Cup is on the horizon and Steve Stricker says the feud is over, but he was unlikely to pair them together.

At their hilarious Ryder Cup winning press conference, the pair then hug it out.

Now we have the fifth edition of the match.

Is it all well and truly over?

NEXT PAGE: WITB OF WORLD NUMBER ONE JON RAHM?