It looked as though Bubba Watson could've been on course for his fourth win at the Travelers Championship, but the 42-year-old collapsed on the back nine. 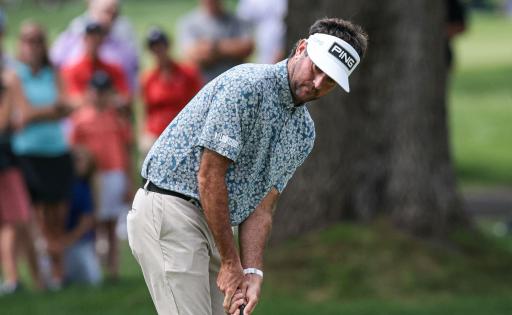 TPC River Highlands has been a happy hunting ground for Bubba Watson through his career, being only one of two players in PGA Tour history to win the tournament three times.

Watson held a one-shot lead with nine holes left in Connecticut and was in cruise control before he suffered an unprecedented collapse in his last five holes.

The two-time major champion made a bogey on the 14th hole to fall back to 12-under-par, but the key moment came on the short par-4 15th hole, where he cut his tee-shot into the water.

Bubba Watson finds the water on No. 15.

He drops back to T2 with 3 holes to play. pic.twitter.com/rOAz0W1S1f

This led to another bogey and he added another one on the 16th hole too. By this point, Harris English and Kramer Hickok were in prime position and well ahead of Watson.

The 42-year-old then made a double-bogey on the 17th hole and yet another bogey on the 18th hole. He finished with a round of 3-over-par and plummeted into a tie for 19th place.

Such a low finishing position was absolutely inconceivable with nine holes to play for Watson, but he just couldn't find the shots to remain in contention for his 13th PGA Tour title.

After the regulation play was finished, English and Hickok battled it out in what became an eight-hole playoff, which now shares the record for the second-longest playoff in PGA Tour history.

English emerged victorious after holing a decisive birdie putt on the 18th hole to claim his fourth PGA Tour career win and his second win of the 2021 season.