It looked as though Harris English was doomed on the second playoff hole at the Travelers Championship, but he survived a scare to prolong the battle with Kramer Hickok. 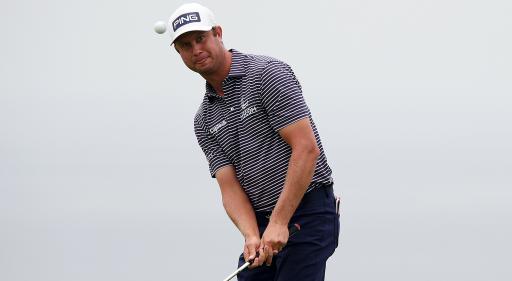 Harris English and Kramer Hickok endured an 8-hole playoff on Sunday at the Travelers Championship, which is the joint second-longest playoff in PGA Tour history.

Both players made nerveless putts and hit consistent shots to the green throughout and despite eventually being victorious, English suffered a scare on the second playoff hole when he was plugged in the greenside bunker on the 18th hole.

His ball was plugged almost underneath the turf and embedded in the sand and with Hickok safely on the green with a long birdie putt, English looked finished.

But he hit a superb bunker shot, splashing his ball out on to the green to leave himself with a short par putt. To make things even more dramatic, Hickok's lengthy birdie putt tracked and somehow lipped out, when it seemed it was always going to drop into the cup.

A tough break for Harris English on the second playoff hole. pic.twitter.com/R58BQJKotO

Each hole of the playoff was halved with a par until the 8th playoff hole, where English rolled in a decisive birdie putt to secure his fourth PGA Tour title.

It was a heartbreaking moment for Hickok, however by the sound of the crowd throughout the afternoon, he has definitely built a strong fanbase moving forward.

English came third at the US Open last week at Torrey Pines, just three shots behind Jon Rahm. His win in Connecticut is the 31-year-old's second win of the 2021 season.

It had been a dramatic afternoon at TPC River Highlands. Both English and Hickok made crucial birdies at the 72nd hole to move to 13-under-par, one shot ahead of clubhouse leader Marc Leishman.

It looked as though Bubba Watson was on course to secure his fourth win at the tournament after nine holes on Sunday, but he imploded and shot 6-over-par in his last five holes to fall out of contention.

NEXT PAGE: HOW MUCH THEY ALL WON AT THE TRAVELERS CHAMPIONSHIP ON THE PGA TOUR