Butterfly chases Brooks Koepka's ball on PGA Tour, but should there be a ruling?

A butterfly touched Brooks Koepka's golf ball as he putted it towards the hole at the Tour Championship on Thursday, so did this cause a rules infringement? 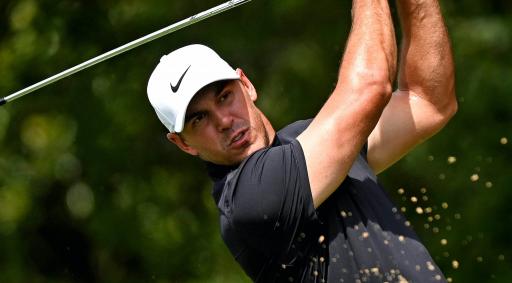 Many of you may have seen a peculiar thing happen at the Tour Championship on Thursday that could have brought up an intriguing rules dispute.

Brooks Koepka played solidly in the first round of the season finale, carding a 3-under-par 67 to move on to 5-under-par for the tournament.

Although the four-time major champion played well at East Lake Golf Club, he still finds himself eight shots behind leader Patrick Cantlay and with it all to do to win his first FedEx Cup.

On one hole in Atlanta, Koepka had a long-range putt which he sent rolling towards the hole and as it was on its way, a butterfly began to chase it along the green.

It appeared that the butterfly did touch the ball of Koepka, but nonetheless, the ball still dropped into the hole for what was an extraordinary highlight of the American's day.

This sparked an interesting thought for us: Did the butterfly's interference with Koepka's ball bring an unexpected rules infringement into play?

Well, the answer is no. According to the Rules of Golf, although similar occurrences in the past have meant that the stroke is to be cancelled, this wasn't necessary on this occasion.

This is because the butterfly was not actually on the green and the PGA Tour have adopted Local Rule D-7, where the animal in this instance is defined as a loose impediment and the player's ball has accidentally hit it.

The ball is played from where it lies and so the shot does not need to be taken again. Koepka was spared of any rules infringement and instead could enjoy the butterfly fluttering along with his ball as it went in the hole.