Patrick Cantlay maintained a one-shot advantage ahead of Jon Rahm after round two of the Tour Championship. 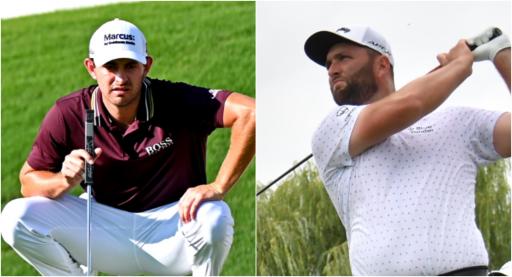 Patrick Cantlay and Jon Rahm produced some sublime golf at the Tour Championship on Friday, but the American holds a one-shot lead on 17-under-par at the halfway stage.

Cantlay, who began his week in pursuit of the FedEx Cup with a 3-under-par 67, played very calmly and consistently on the front nine by making eight pars and just one birdie.

The five-time PGA Tour winner then almost holed out from the fairway with his second shot at the 13th hole, but this birdie helped him to move to 15-under-par.

But Rahm matched Cantlay. Having made just the one birdie on the front nine as well, he made back-to-back birdies on the 12th and 13th holes to move just one behind his opponent, in what became a two-man showdown at East Lake Golf Club.

RELATED: BUTTERFLY CHASES BROOKS KOEPKA'S BALL ON PGA TOUR, BUT SHOULD THERE BE A RULING?

The World No. 1 made three fantastic birdies in his last three holes, and he almost holed his bunker shot on the final green for an eagle to draw level with Cantlay on 17-under-par.

The Spaniard settled for a 5-under-par 65 on Friday to sit on 16-under-par for the week. Cantlay crucially birdied his final two holes in Atlanta to shoot a 66, keeping Rahm at arm's length with a one-shot lead.

Both players have been mightily impressive in the final stages of the season. Rahm has made four consecutive top-10 finishes on the PGA Tour, while Cantlay thrillingly won the BMW Championship last week in Maryland.

Bryson DeChambeau, who Cantlay defeated in a six-hole playoff last week, is on 11-under-par for the tournament after carding a 3-under-par 67 in the second round.

RELATED: THE BEST GOLF BAGS THAT WILL SET YOU UP FOR THE AUTUMN!

The big-hitting American was 3-under-par for his round but he then made back-to-back bogeys at the 13th and 14th holes. Two birdies in his last two holes meant that he finished six shots behind Cantlay.

Justin Thomas is a further shot back in fourth place on 10-under-par, while there are five players in a tie for fifth on 9-under-par.