Cameron Smith: What's in the bag of the Players Championship winner?

Cameron Smith survived a dramatic turn of events on the 72nd hole to win The Players Championship and to pick up $3.6 million. 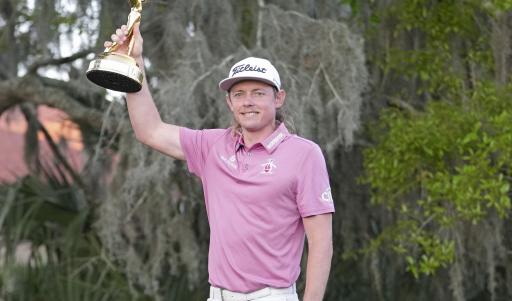 Cameron Smith picked up his second win of the 2022 PGA Tour season and the fifth of his career at The Players Championship.

The Australian took control of the tournament with four consecutive birdies from hole 10 to hole 13 to reach 13-under-par. He was two shots ahead of Paul Casey, Anirban Lahiri and Keegan Bradley.

He then took dead aim on the famous par-3 17th hole, albeit unintentionally, and made a fantastic birdie to take a three-shot lead into the final hole.

Smith hit his drive into the pine straw to the right of the fairway, but his pitch out on to the fairway raced through the short grass and into the water.

Moments later, Lahiri birdied the 17th hole to reach 12-under-par and suddenly, Smith was under immense pressure to win the event and the $3.6 million winners prize at his mercy.

The 28-year-old made a nerveless up-and-down for a bogey at the 72nd hole to finish on 13-under-par. Lahiri had a chip for birdie to force a playoff, but it fell short.

Smith became the fifth Australian player to win The Players Championship and he has risen to number six in the world rankings.

Cameron Smith: What's in the bag?