Paul Casey's bad break at The Players: Time for this rule to be changed?

Paul Casey had one of the unluckiest breaks imaginable during the final round at The Players. Should this rule be changed?! 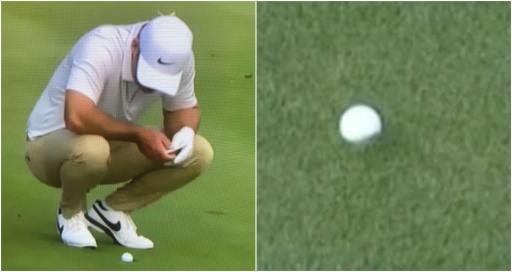 The Players Championship was a strange one. Not short of drama at all. But it felt like the tournament that would never end.

For the first time since Fred Funk won the unofficial fifth major back in 2005 - we saw another white-knuckle Monday finish.

It was a strange week in many respects. Some players thought the integrity of the tournament was called into question.

That was because of the differing conditions players had in their opening two rounds. Tommy Fleetwood led the charge in great conditions.

Others simply had to hold on for dear life. Some golf experts suggested breaking 75 in the wind in round two would represent a "good day".

Kevin Kisner, who finished fourth, reacted in the only way he knew how: sarcasm. "I thought the conditions were fairly easy," he said.

He then said: "Well, balls rolling on the greens, only 72 of us playing in that. I don't know. It's just going to be different tomorrow. I understand the difference in the waves, but when I got to 17 and 18 you couldn't hardly stand up much less hit a golf shot."

"Yeah, we've had it amazing for two days, we really, really have, and I consider myself very lucky. It's nice to make the most of it, as well. Like still people have missed the cut on the right side of the draw."

Kisner ended up finishing his tournament at 10-under, five strokes ahead of Fleetwood.

So you could tentatively make the argument that this Players was still about skill (not just purely luck).

Ruling controversies at The Players

One thing we were not shy of were some rules controversies.

Keegan Bradley was unaware of the finer details of Rule 13.1(d).

Both Bradley and Rory McIlroy needed to have an understanding of this rule.

It cost Bradley two strokes but not McIlroy.

Read about what happened to Rory McIlroy and Bradley here.

Englishman Paul Casey also had the unluckiest of breaks when he sent a drive down the middle at the 16th in the final round.

The ball rolled and rolled...into someone else's pitch mark. Lovely.

Casey managed to laugh it off later when talking to the media.

The game allows - specifically under Rule 16.3a - for relief for an embedded ball only if it is in your own pitch mark.

Perhaps Casey needed Pat Reed on the bag during his final round at The Players.

"Mind if I stick my finger in there?"

Sometimes it is just not your day. Should the rule be changed?

In my opinion, it should not be. These things happen once in a blue moon and it is just one of those things you just have to suck it up.

What do you think? Let us know on our social media channels.